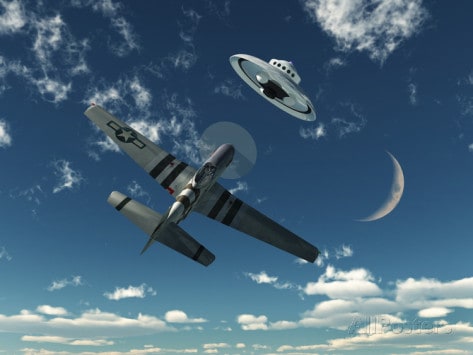 Was Air Force pilot Thomas Mantell the first casualty of a US war against beings from another world?

In the late 1940s reports of UFO sightings across the United States were at an all-time high after the reported sighting of nine flying saucers over the Cascade Mountains of Washington and the reported crash of a UFO in Roswell, New Mexico.

Though UFO reports from that era were rather benign, simply sightings of strange objects in the sky, on the afternoon of January 7th, 1948, things would take a possibly sinister, and fatal turn.

Shortly after noon on that fateful afternoon many witnesses in western Kentucky sighted a large unidentified craft, between 250 and 300 feet in diameter souring above them at a fantastic speed.

Moments later the object’s flight path took it into the view of the tower crew at Godman Air Force Base, near Fort Knox.

As fate would have it, at precisely that moment a group of four Air National Guard P-51 Mustangs were circling the field preparing to land. The tower radioed the planes to abort their landing and pursue the object that had just flown past the tower.

One of the planes was dangerously low on fuel, and had no choice but to land, but the other three prop-driven-fighters peeled off in a high-speed pursuit of the strange object.

Initially the group, which was under the command of Captain Thomas Mantell, got a good, close look at the UFO. One of the pilots confirmed that the craft was “of tremendous size”, while yet another described it as “round like a teardrop, and at times almost fluid.”

Whether spooked or running low on fuel themselves, two of the fighters broke off the chase leaving Mantell as the lone pursuer of the object.

At 3:15 pm the Air Force Captain radioed back to Godman that he was going to try and move in closer to the UFO to get a better look at it.

Several hours later the wreckage of the P-51, along with Mantell’s remains, were discovered in the woods close to Fort Knox.

Though no one knows for sure just what exactly happened to the Air Force Captain and his plane after his last message, many have speculated that it was either forced to crash or even shot down by the UFO. The Air Force, officially, reported that Mantell had ‘blacked-out’ at 20,000 feet due to lack of oxygen and crashed.

As for the gigantic UFO, the Air Force initially reported that the object Mantell and his squadron had been chasing was the planet Venus. Later reports indicated that it was a weather balloon from the US Navy’s infamous ‘Project Skyhook’, which was also reported to be what was recovered in Roswell almost a year to the day prior.

For civilian investigators, the Venus explanation made little to no sense, due to the fact that the incident occurred during daytime hours and also because the planet, if it were visible, would not have been directly in Mantell’s flight path.

Speculation has persisted that Mantell may have been the first casualty in a secret war, or number of violent confrontations between the US military and UFOs. The government’s obvious cover up of the incident has done nothing but fuel these rumors.

Despite whether Mantell was shot down, or merely crashed due to a ‘black-out’, the incident prompted the US military to begin to look at UFO cases more seriously. Soon after reported sighting Ohio State scholar J. Allen Hyneck was put in charge of Project Sign a military office assigned to investigate UFOs.