Following her divorce, Page worked briefly in San Francisco, and in Haiti. She moved to New York City, where she hoped to find work as an actress. In the meantime, she supported herself by working as a secretary. In 1950, while walking along the Coney Island shore, Bettie met Jerry Tibbs, a police officer with an interest in photography. Bettie was a willing model, and Tibbs took pictures of her and put together her first pinup portfolio.

In the late 1940s, what were known as camera clubs were formed as a means of circumventing legal restrictions on the production of nude photos. These clubs existed ostensibly to promote artistic photography, but many were merely fronts for the making of erotica. Page entered the field of glamour photography as a popular camera club model, working initially with photographer Cass Carr. Her lack of inhibition in posing made her a hit. Her name and image became quickly known in the erotic photography industry, and in 1951, her image appeared in men’s magazines with names like Wink, Titter, Eyefull and Beauty Parade.

From 1952 through 1957, she posed for photographer Irving Klaw for mail-order photographs with pin-up, bondage or sadomasochistic themes, making her the first famous bondage model. Klaw also used Page in dozens of short black-and-white 8mm and 16mm “specialty” films which catered to specific requests from his clientele. These silent featurettes showed women clad in lingerie and high heels acting out fetishistic scenarios of abduction, domination, and slave-training with bondage, spanking, and elaborate leather costumes and restraints. Page alternated between playing a stern dominatrix and a helpless victim bound hand and foot. Klaw also produced a line of still photos taken during these sessions. Some have become iconic images, such as his highest-selling photo of Page shown gagged and bound in a web of ropes from the Leopard Bikini Bound film. Although these underground features had the same crude style and clandestine distribution as the pornographic “stag” films of the time, Klaw’s all-female films (and still photos) never featured any nudity or sexual content.

Bettie Page’s trademark curvy figure and raven hair made her a fixture in men’s magazines in the 1950s, and the icon found a cult following that lasted long after her modelling days.

Playboy founder Hugh Hefner, who hand-picked Page to be the Playmate of the Month in January 1955, has paid tribute to the star, saying: “I think that she was a remarkable lady, an iconic figure in pop culture who influenced sexuality, taste in fashion, someone who had a tremendous impact on our society. She was a very dear person.”

Page faded into obscurity in the 1960s after converting to Christianity and serving as a Baptist missionary in Angola, she experienced a resurgence of popularity in the 1980s and had a significant cult following. Her look, including her jet black hair and trademark bangs, has been iconic within the rockabilly subculture and has influenced many artists.

Page was born Betty Mae Page in Nashville, Tennessee on April 22, 1923, the second child of Walter Roy Page and Edna Mae Pirtle. At a young age, Page had to face the responsibilities of caring for her younger siblings. Her parents divorced when she was 10 years old. Following the divorce, Page and her sister lived in an orphanage for a year. During this time, Page’s mother worked two jobs, one as a hairdresser during the day and washing laundry at night. As a teenager, Page and her sisters tried different makeup styles and hairdos imitating their favorite movie stars. She also learned to sew. These skills proved useful years later for her pin-up photography when Page did her own makeup and hair and made her own bikinis and costumes. A strong student and debate team member at Hume-Fogg High School, she was voted “Most Likely to Succeed.” During her early years, the Page family traveled around the country in search of economic stability.As the salutatorian of her class, on June 6, 1940, Bettie Page graduated from high school with a scholarship and enrolled at George Peabody College with the intention of becoming a teacher. However, the next fall she began studying acting, hoping to become a movie star. At the same time, she began her first job, typing for author Alfred Leland Crab. Page graduated from Peabody with a Bachelor of Arts degree in 1944. In 1943, she married high school classmate Billy Neal in a simple courthouse ceremony shortly before he was drafted into the Navy for service in World War II.For the next few years, Bettie moved from San Francisco to Nashville to Miami and to Port-au-Prince, Haiti, where she felt a special affinity with the country and its culture. In November 1947, while back in the United States, Bettie filed for divorce from Neal. 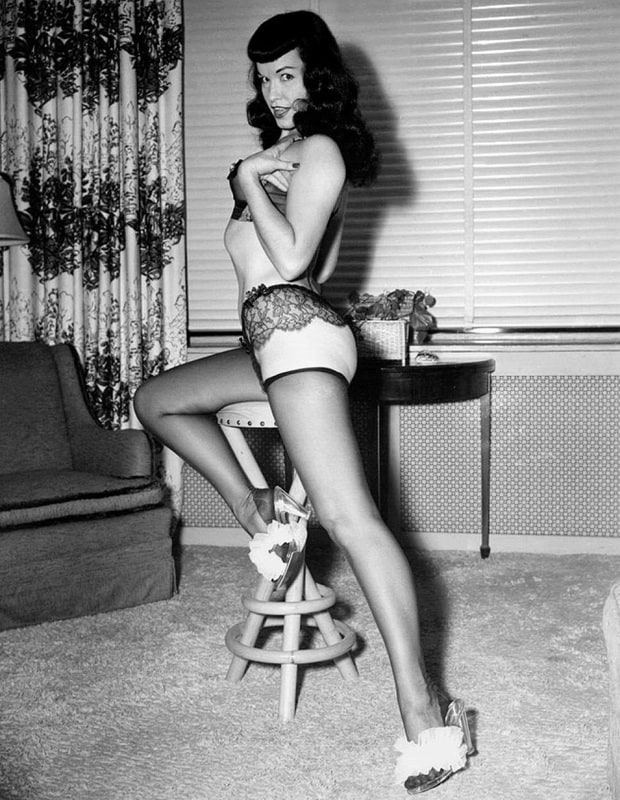 In 1953, Page took acting classes at the renowned Herbert Berghoff Studios, which led to several roles on stage and television. She appeared on The United States Steel Hour and the The Jackie Gleason Show. Her off-Broadway productions included Time is a Thief and Sunday Costs Five Pesos. Also in 1953, Page acted and danced in the feature-length burlesque revue film Striporama by Jerald Intrator. She was given a brief speaking role, the only time her voice has been captured on film. She then appeared in two more burlesque films by Irving Klaw (Teaserama and Varietease). These featured exotic dance routines and vignettes by Page and well-known striptease artists Lili St. Cyr and Tempest Storm. All three films were mildly risque, but none showed any nudity or overtly salacious content.

In 1954, during one of her annual pilgrimages to Miami, Florida, Page met photographers Jan Caldwell, H. W. Hannau and Bunny Yeager. At that time, Page was the top pin-up model in New York. Yeager, a former model and aspiring photographer, signed Page for a photo session at the now-closed wildlife park Africa USA in Boca Raton, Florida. The Jungle Bettie photographs from this shoot are among her most celebrated. They include nude shots with a pair of cheetahs named Mojah and Mbili. The leopard skin patterned Jungle Girl outfit she wore was made, along with much of her lingerie, by Bettie herself. A large collection of the Yeager photos, and Klaw’s, were published in the book Bettie Page Confidential (St. Martin’s Press, 1994).

After Yeager sent shots of Page to Playboy founder Hugh Hefner, he selected one to use as the Playmate of the Month centerfold in the January 1955 issue of the two-year-old magazine. The famous photo shows Page, wearing only a Santa hat, kneeling before a Christmas tree holding an ornament and playfully winking at the camera. In 1955, Bettie won the title “Miss Pinup Girl of the World.” She also became known as “The Queen of Curves” and “The Dark Angel”.

While pin-up and glamour models frequently have careers measured in months, Page was in demand for several years, continuing to model until 1957. Although she frequently posed in the nude, she never appeared in scenes with explicit sexual content. The reasons reported for her departure from modeling vary. Some reports mention the Kefauver Hearings of the Senate Subcommittee on Juvenile Delinquency (after a young man apparently died during a session of bondage which was rumored to be inspired by Page), which ended Irving Klaw’s bondage and S&M mail-order photography business. In fact, the United States Congress called her to testify to explain the photos in which she appeared. While she was excused from appearing before the committee, the print negatives of many of her photos were destroyed by court order. For many years after, the negatives that survived were illegal to print.

However, the most obvious reason for ending her modeling career was her conversion to Christianity while living in Key West, Florida in 1959 in combination with the 1957 trials, after which she severed all contact with her prior life.