In my many attempts to add ‘classic’ film reviews to Monster Island News, I often times pass over really great movies, sometimes even passing over some of my personal favorites, in order to tie themes and past topics together. One such film that I have regrettably passed over, for far too long, is the 1986 action/comedy “Big Trouble in Little China”.

For those of you out there that know me pretty well, you understand that “Big Trouble” is one of my all-time favorite movies, so the fact that I have chosen it to begin getting back to talking about older films should come as no surprise.

Originally envisioned by film maker John Carpenter, as a ‘classic’ western movie, then a ‘modern’ western movie, “Big Trouble in Little China”, eventually evolved into action/comedy that pays homage to Kung-Fu cinema. After several studios balked at the idea of martial arts themed, ‘cowboy’ movie, screenwriter W. D. Richter was hired by Carpenter to ‘modernize’ the script. It would seem that Richter would have his own agenda in mind when developing a new story for “Big Trouble”, the early drafts all tied in the film as a sequel to his 1984 film, “The Adventures of Buckaroo Banzai Across the 8th Dimension!”. Carpenter, however, wasn’t on the same page as Richter, wanting “Big Trouble in Little China” to be a stand-alone film, and not a sequel, so references to “Buckaroo Banzai” never made it into the final screenplay. “Big Trouble in Little China” stars Kurt Russell has the truck driver with a big ego, and big heart, Jack Burton. Russell had resurrected his career in the early 80s after success in family oriented Disney films in the late 1960s and early 1970s.

In 1981 Russell stared as Snake Plissken in the sci fi/action film “Escape From New York”, and it was hoped that the actor would bring some action star moxy to the Burton role, though the part would be played mostly for laughs.

Cast alongside Russell as one of a pair of damsels in distress, is Kim Cattrall, who had come to the director’s attention after appearing in the successful comedies, “Porky’s” and “Police Academy.” As most of you know, Cattrall would follow up “Big Trouble” with the starring role in the hugely successful romantic comedy “Mannequin”, then would move on to play the sexy, but oh so logical, Vulcan, Valeris, in “Star Trek VI: The Undiscovered Country”.

Most of you would probably know Cattrall from here role as Samantha Jones on the syndicated series, “Sex and the City.” Cattrall would make a perfect counterpart to the bumbling Jack Burton as the overly confident San Francisco lawyer, Gracie Law.

Cast as the films villain, Lo Pan (aka David Lo Pan) is veteran Asian/American actor James Hong. Lo Pan, of course, is a three-thousand year old cursed Chinese sorcerer who needs to sacrifice a girl with ‘dragon-green’ eyes to break his curse and gain immortality.

Rounding out the cast are Dennis Dun as Burton’s sidekick, who is a martial arts master and Chinese restaurant owner, Wang Chi. Victor Wong, who also starred in the rival film “The Golden Child”, as Egg Shen, the ancient Chinese sorcerer who’s duty it is to rid the world of the evil Lo Pan. Kate Burton as the in over her head reporter, Margo. And last but not least, Donald Li as Wang Chi’s matradee, who knows how to use a gun, Eddie Lee.

Most notable of the remaining cast is Suzee Pai, a former Penthouse Pet, who plays Wang Chi’s fiance, Miao Yin, who has “dragon-green” eyes, so she becomes part of Lo Pan’s sacrificial plans, alongside the jade-eyed, Gracie Law. Pai plays a pivotal role in the film, yet director John Carpenter opted to cut all of her speaking parts, spare one, out of the finished film. P 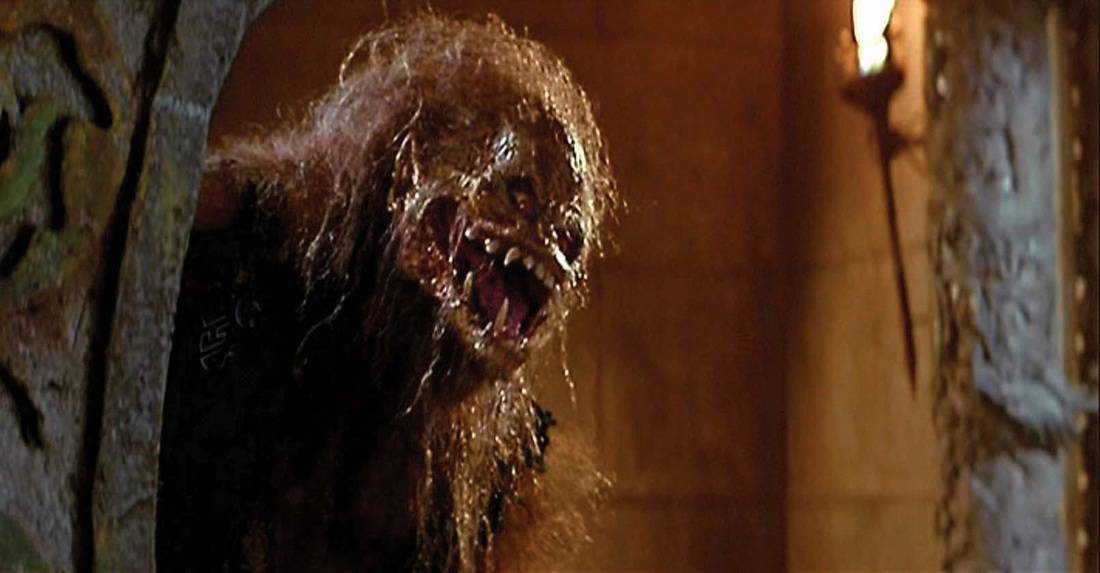 When truck driver Jack Burton (Kurt Russell) and his friend Wang Chi (Dennis Dun) go to the airport to meet friends arriving on a flight from China, bandits from Chinatown kidnap Wang’s green-eyed Chinese girlfriend (Suzee Pai). To rescue her, Burton and Wang go into the mysterious underworld beneath Chinatown, where they face a number of dangerous challenges and battle kung-fu masters and a 2,000-year-old man – an ancient sorcerer named Lo Pan (James Hong). Centuries ago, Lo Pan was put under a curse, and the only way that he can break it and become human again is to marry a woman with green eyes and then sacrifice her. Lo Pan is served by a ruthless street gang, the “Wing Kong”, and by the “Three Storms” – three mystical henchmen named Thunder, Lightning and Rain. Jack and Wang are aided in their quest by lawyer Gracie Law (Kim Cattrall), a tour bus-driving sorcerer named Egg Shen (Victor Wong), Wang’s friend Eddie Lee (Donald Li), and a helpful street gang, the Chang Sing.

Where “Big Trouble in Little China” really works is as a comedy. Kurt Russell really steals the show as the cocky, yet bumbling, hero Jack Burton. What makes the whole film stand out, though, is the on screen chemistry between Russell, Kim Cattrall, Dennis Dun, Victor Wong, and even James Hong cast as the film’s antagonist.

The film also excels as a great ‘quote’ movie. After watching “Big Trouble” you will probably be spouting Burton’s one-liners for weeks.

Jack Burton: When some wild-eyed, eight-foot-tall maniac grabs your neck, taps the back of your favorite head up against the barroom wall, and he looks you crooked in the eye and he asks you if ya paid your dues, you just stare that big sucker right back in the eye, and you remember what ol’ Jack Burton always says at a time like that: “Have ya paid your dues, Jack?” “Yessir, the check is in the mail.”

Jack Burton: Okay. You people sit tight, hold the fort and keep the home fires burning. And if we’re not back by dawn… call the president.

Jack Burton: We really shook the pillars of heaven, didn’t we, Wang?

Honestly, I could fill up the whole page with these!

Though, “Big Trouble in Little China” was a box office flop, the film gained a second life in the home video market. Now the film is considered by most to be a ‘cult-classic.”

To this day, director John Carpenter is bombarded by fans at conventions, wanting to know if he will ever make a “Big Trouble” sequel. Unfortunately, he always gives a polite ‘no’, and then changes the subject.