Conrad Veidt A Lost Actor In Universal’s History Of Horror

Just about every film buff knows the stars of the classic line of horror films produced by Universal in the 1920s’, 30s’ and 40s’. Bela Lugosi, Boris Karloff and Lon Cheney, three names that will forever be remembered in the hearts of movie fans around the world. Yet, one name always seems to omitted from the list. True this mystery actor never played Dracula or Frankenstein’s Monster, yet his part in the history of horror is just as important as any actor who ever wore a cape or endured hours wrapped in bandages.

I am of course talking about Conrad Veidt. Still don’t know who I’m talking about? Well, I’m certain that you have heard of some of the films he starred in. Veidt would become known for his roles in such films as “The Cabinet of Dr. Caligari” (1920), “The Thief of Bagdad” (1940), and “Casablanca” (1942). His likeness as Gwynplaine in “The Man Who Laughs” would serve as the inspiration for the comic book supervillain “The Joker.” 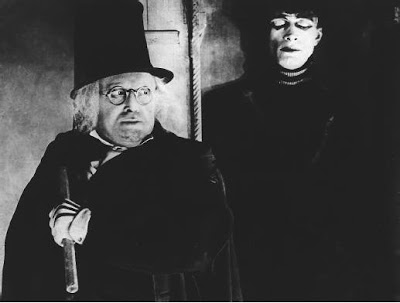 He was born Hans Walter Conrad Weidt in a working-class district of Berlin, Germany. (Some biographies wrongly state that he was born in Potsdam, probably on the basis of an early claim on his part.) From 1916 until his death, he appeared in well over 100 movies.

He appeared in two of the most well-known films of the silent era: as a murderous somnambulist in director Robert Wiene’s The Cabinet of Dr. Caligari (1920) opposite Werner Krauss and Lil Dagover, and as a disfigured circus performer in The Man Who Laughs (1928).

“The Cabinet of Dr. Caligari” directed by Robert Wiene from a screenplay written by Hans Janowitz and Carl Mayer. It is one of the earliest, most influential and most artistically acclaimed German Expressionist films. Many historians note that this was the first true horror movie ever produced.

The film tells the story of the deranged Dr. Caligari and his faithful sleepwalking Cesare, and their connection to a string of murders in a German mountain village, Holstenwall. Caligari presents one of the earliest examples of a motion picture “frame story” in which the body of the plot is presented as a flashback, as told by Francis.

The narrator, Francis, and his friend Alan visit a carnival in the village where they see Dr. Caligari and the somnambulist Cesare, whom the doctor is displaying as an attraction. Caligari brags that Cesare can answer any question he is asked. When Alan asks Cesare how long he has to live, Cesare tells Alan that he will die tomorrow at daw, a prophecy which turns out to be fulfilled.

Francis, along with his girlfriend Jane, investigate Caligari and Cesare, which eventually leads to Cesare kidnapping Jane. Caligari orders Cesare to kill Jane, but the hypnotized slave refuses after her beauty captivates him. He carries Jane out of her house, leading the townsfolk on a lengthy chase. Francis discovers that “Caligari” is actually the head of the local insane asylum, and with the help of his colleagues discovers that he is obsessed with the story of a medieval Dr. Caligari, who used a somnambulist to murder people as a traveling act.

Cesare falls to his death during the pursuit and the townsfolk discover that Caligari had created a dummy to distract Francis. After being confronted with the dead Cesare, Caligari breaks down and reveals his mania and is imprisoned in his asylum. The influential twist ending reveals that Francis’ flashback is actually his fantasy: he, Jane and Cesare are all inmates of the insane asylum and the man he says is Caligari is his asylum doctor, who, after this revelation of the source of his patient’s delusion, says that now he will be able to cure Francis.

“The Man Who Laughs” (1928) was directed by the German Expressionist filmmaker Paul Leni for Universal. The film was an adaptation of Victor Hugo’s novel of the same name and stars Conrad Veidt as Gwynplaine and Mary Philbin as the blind Dea. The film is known for the grim Carnival freak like grin on the character Gwynplaine’s face which often leads the film to be credited to the horror film genre.

Taking place in England in the year 1690, The Man Who Laughs features Gwynplaine, the son of an English nobleman who has offended King James II. The monarch sentences the parent to death in an iron maiden and the son to a lifetime of public humiliation through extraordinary mutilation. The King calls upon the skills of a surgeon, Dr. Hardquannone, associated with a band of ostracized and feared Gypsies, the Comprachicos, and the boy’s face is horribly fixed into a permanent rictus grin. As a title card states, the King condemns him “to laugh forever at his fool of a father.”

The homeless Gwynplaine wanders around in a snowstorm and discovers an abandoned baby girl, the blind Dea. The two children are eventually taken in by Ursus, a mountebank. Years pass and Dea and Gwynplaine fall in love but Gwynplaine refuses to allow himself to marry her because he feels his hideous face makes him unworthy. The three earn their living through plays based upon the public’s voyeuristic fascination with Gwynplaine’s mangled facial features. Their travels bring them back into the path of the deceased King’s successor, Queen Anne. Here, Queen Anne’s jester, Barkilphedro, discovers records which reveal Gwynplaine’s lineage and his potential inheritance of his father’s position in the court.

Gwynplaine’s deceased father’s estate, currently owned by the Duchess Josiana, is in her possession, and Queen Anne decrees that the royal duchess must marry Gwynplaine, the rightful heir, to make things right. Josiana, who has seen Gwynplaine’s act, arranges a rendezvous, and is at the same time sexually attracted to and repelled by the “Laughing Man” image. Gwynplaine, made a Peer in the House of Lords, refuses the Queen’s order of marriage and escapes, chased by guards. He finds Ursus and Dea at the docks, sailing from England under banishment, and joins them on the boat. The film thus leaves off the tragic ending of Hugo’s original novel, in which Dea dies while the group is sailing away from England, and Gwynplaine drowns himself.

Stills of Veidt were used as inspiration by the Joker’s creators, artist Bob Kane, writer Bill Finger and artist Jerry Robinson,the creators have long disputed who actually came up with the character. Veidt also appeared in Magnus Hirschfeld’s pioneering gay rights film Anders als die Andern (“Different from the Others”, 1919), in which he played what is likely the first gay character written for the cinema, and in Das Land ohne Frauen (1929), Germany’s first talking picture.

Veidt fervently opposed the Nazi regime, and he emigrated from Germany in 1933 a week after marrying a Jewish woman, Illona Prager. He settled in the United Kingdom and continued making films, notably three with director Michael Powell: “The Spy in Black” (1939), “Contraband” (1940) and “The Thief of Bagdad” (1940).

He later moved to Hollywood, and starred in a few films, such as Nazi Agent – in which he had a dual role as a Nazi and as the Nazi’s twin brother. But he is most well known in this period for playing the Nazi Major Heinrich Strasser in “Casablanca” (1942).

He died of a heart attack a year later, while playing golf in Los Angeles.

Veidt sang the title song “Where the Lighthouse Shines Across the Bay” of the 1933 film “F.P.1”. It was a flop at the time, but became a hit in the United Kingdom in 1980. Disc-jockey Terry Wogan had played it as a request on his breakfast show and was flooded afterwards with letters asking for a repeat.