Creature From The Black Lagoon

Creature From The Black Lagoon (1954)(Universal)

Creature from the Black Lagoon was the last of a long line of classic movie monsters developed by Universal Pictures. By the 1950’s most studios had switched from horror pictures to science fiction. Universal was no exception. Creature would come fresh on the heels of the very popular “It Came from Outer Space.” Both films would star Richard Carlson who soon would become the studio’s staple playing the role of hero scientist. This would be a twist from most films. Scientists were generally portrayed as evil or misguided. It was only logical for Universal to blend both their popular horror with the science fiction of the time. Creature from the Black Lagoon would be created from the melding of the two.

Early designs for the Gill-Man (Creature) were very different from the finished product that we are familiar with today. Early on studio executives had wanted a very sleek looking monster. Test shots proved that this design just didn’t look right under water. The design was quickly scraped for a more scaly design with gills and more rounded head. Hence fourth the Creature was born. The original costume was kept in limbo in case a sequel was to be made and a possible female Creature would be needed. Of course a sequel was made the next year but, the She-Creature never made it into a film.

Most monster movie fans have believed for decades that the design of the Creature was the work of Bud Westmoore, but that is not the case. The Creature’s “gill-man” design actually came off of the pen of artist Milicent (Millicent) Patrick. Although the fetching young illustrator never got her name in the films credits she was paraded from film screening to film screening in hopes that her model-like good looks would drum up more publicity for the film. Her contribution to the history of monster films has never been fully given the credit that it so deserves. Unfortunately there a far too many such “unknown heroes” in the genre of horror and sci-fi films.

Two actors would end up actually playing the Creature. Ricou Browning was used for the underwater shots and Ben Chapman for the scenes on dry land. Browning had been responsible for showing the films producers two areas, one in Silver Springs, and the other in Wakulla Springs, Florida that would end up being used as the Black Lagoon. He was asked to swim in front of the camera for some underwater test shots. A week later he was called and asked if he would like the job. He accepted. Browning worked well for the underwater Creature but, the studio wanted the monster to be a giant and he was less than six feet in height. That’s when the six foot seven inch Ben Chapman entered the picture. With the costume on he measured in at well over seven feet tall. That was just what the film makers were looking for. As a result of there being two actors of different sizes two separate Creature costumes were developed. Each would be quite different in design and appearance to fit each actor. On screen these differences are not detectable but, when one costume was next to the other it was obvious. This worked because the viewer would never see the two together and no one ever noticed.

The Creature from the Black Lagoon was shown originally in 3-D. 3-D pictures were becoming popular in Hollywood in the middle 1950’s and Creature was filmed to fit this format. A special underwater 3-D camera was developed exclusively for use in this production. Viewers would remark on how they felt like they were underwater with the monster. It was a very unique experience. However showing a film in 3-D was a difficult process. If the two cameras needed to produce the effect were not aligned properly the image would turn blurry and the 3-D effect would be ruined. This forced later releases of the film to abandon 3-D for a more conventional showing.

It is a very interesting story how legendary monster movie fan and writer (Famous Monsters of Filmland Magazine) Forrest J Ackerman came into possession of the Gill-man’s mask and claws. After Universal had finished working on Creature from the Black Lagoon and its two sequels, Revenge of the Creature and The Creature Walks Among Us, the remains of the costume were set out for the trash (!). A studio janitor discovered the costume a thought that it may have been a great present for his young son. The young boy enjoyed scaring the neighborhood children with it for a couple of Halloweens until he outgrew it and sold it to another boy for five dollars (!). Ackerman by this time had learned of the costumes whereabouts and contacted the boy to see if he wanted to sell it. The boy knew who Ackerman was and offered to give it to him for free after he was done with it. Several years down the road the boy, now a grown man, would show up at Ackerman’s door, costume in hand only to discover that he wasn’t home. Knowing full well that he couldn’t just leave it on the doorstep he decided to place it in the trunk of his rental car and return with it in the morning. Unfortunately he returned the rental without removing the costume from the trunk. The monster gods must have been smiling on Ackerman that day because when the gentleman returned to the rental car agency he found that the car had not yet been rented and that the costume was still where he had left it.

There have been numerous attempts at producing a remake of Creature from the Black Lagoon; in fact one is production at the time of this article. In the 1980s’ Universal had planned a 3-D remake which would have been directed by Jack Arnold and produced by John Landis. A script was penned by Nigel Kneale and Rick Baker was put on alert to design a new Gill-man costume, but in the end Universal decided to make Jaws 3-D instead. The Creature almost arose from the swamp again in the 1990s’ under the direction of John Carpenter, but again those plans fell through.

An archeological expedition to the Amazon discovers the fossilized remains of the arm and clawed hand of a “missing link” between man and fish. The item is returned to civilization and a research team consisting of marine biologist Dr. David Reed (Richard Carlson), his employer Mark Williams (Richard Denning), his assistant Kay (Julia Adams), and the man responsible for the find, Dr. Carlos Maia, are quickly assembled to return to the Amazon to search for the rest of the remains.

Upon returning to the site the group discovers that the campsite has been ransacked and the members of first expedition have been slaughtered. Despite this grizzly discovery the group continues on with the dig to no avail. It is soon discovered that the rest of the remains must have been washed down stream into an area that is known to the local natives as “The Black Lagoon.”

Upon arrival at the mysterious lagoon the young assistant, Kay, decides to take a morning swim when she catches the attention of the ominous Gill-man who instantly becomes fascinated with the delicate creature he sees swimming above him. The young woman soon becomes the Creatures obsession and several attempts are made by the monster to capture her.

The group quickly finds itself in a fight for survival after several attempts are made to capture the Creature. The monster effectively blocks the exit from the lagoon and finally captures the object of its fascination. A rescue operation is immediately put into action and the monster is tracked to its lair where it is shot several times. In the end the Gill-man stumbles back into the lagoon where it is last seen floating lifeless in the murky water. 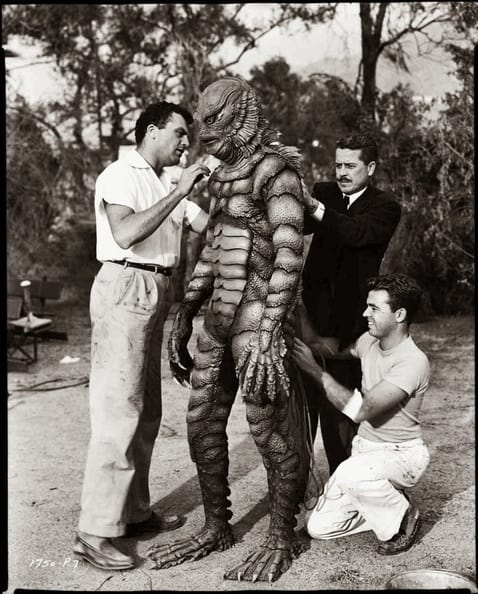 The sign of the fish … are you kidding me?

“… Their natures tend to be too otherworldly for the practical purposes of living in this world as it is. They sometimes exist emotionally rather than rationally, instinctively more than intellectually (depending on how they are aspected). They long to be recognized as greatly creative. They also dislike disciple and confinement. The nine-to-five life is not for them. Any rebellion they make against convention is personal, however, as they often times do not have the energy or motivation to battle against the Establishment.”

Hence the reason why he lived alone in the swamp.