King Ghidorah, sometimes spelled King Ghidrah, King Ghidra or King Ghidora and also
known as Monster Zero, is a fictional Japanese monster featured in several of Toho Studios’
Godzilla films and (in derivative forms) in their Rebirth of Mothra trilogy. Ghidorah is among
the most powerful giant monsters in daikaiju eiga with a reputation that has earned him the
title “The King of Terror”. He is the main antagonist of the series and is considered Godzilla’s
archenemy, and has been in more movies than any other opponent of Godzilla, appearing in
six films out of the series (seven, if one counts Kaizer Ghidorah, despite the vast difference in
size and general appearance between the two).

Created as an opponent for Godzilla, Rodan, and Mothra in 1964’s Ghidorah, the
Three-Headed Monster, Ghidorah is a golden dragon-like space alien with two legs, three
heads on long necks, no arms, large fan-like wings, and two tails. It was said to be 100
meters tall with a 150-meter wingspan and to weigh 30,000 metric tons. King Ghidorah was
brought to life on the movie screen by a stunt actor inside an elaborate three-piece costume,
with a team of puppeteers to control the beast’s many appendages. Its alarming shrieks (a
different ringing pitch for each of its heads) are among the genre’s most recognizable sound
effects. Its design is due to special effects director Eiji Tsuburaya based on a minimal
description in the script: “It has three heads, two tails, and a voice like a bell.” 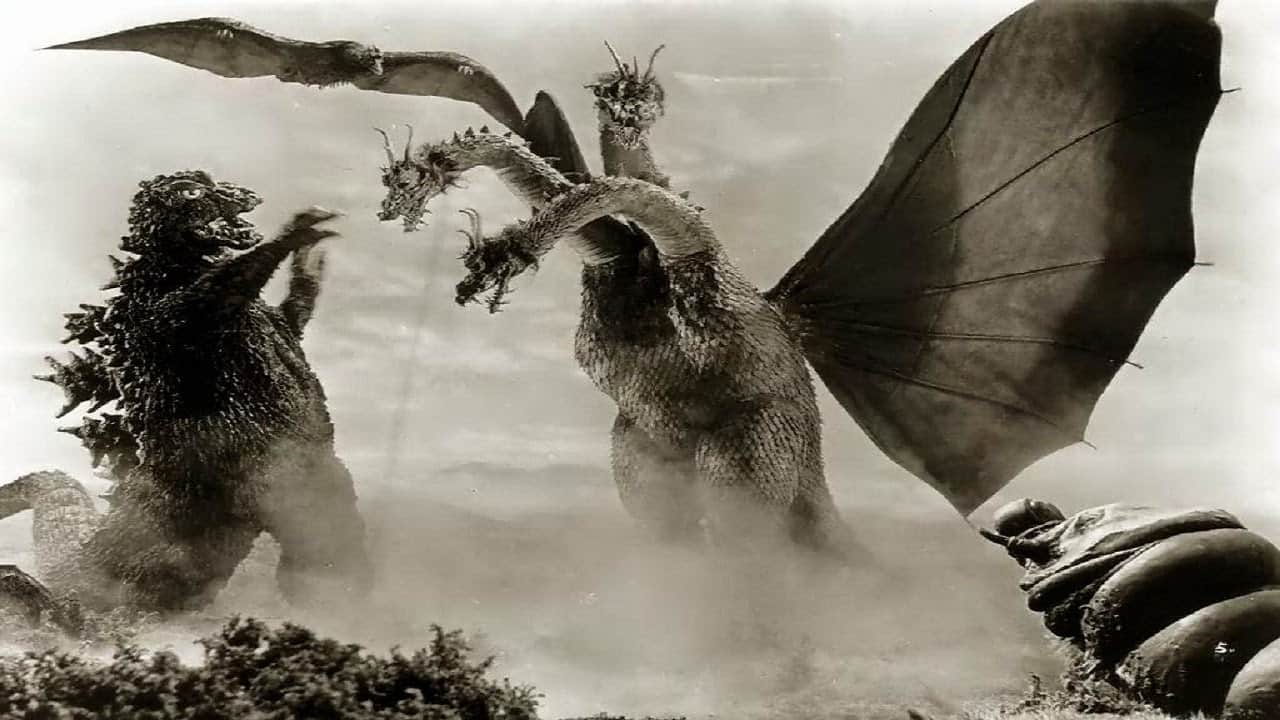 The balance of the universe has been upset by the entrance into earth’s atmosphere of a brilliant meteorite. The people are totally unprepared for the shock of seeing a three-headed monster with wings, flames spewing forth from its multiple mouths, emerge from the fireball from outer space. It is GHIDRAH! Its giant wings lift it into flight as it soars off to ravage the planet Earth.

Godzilla and Rodan are reactivated from hibernation because of this upset in the balance of the universe.

Royal Princess Salno of Selgina, a small country between the two worlds, appears before the unbelieving people as a beautiful Prohetess (EIKO WAKABAYASHI) and proclaims herself to be a Martian. Naoko (YURIKO HOSHI), an enterprising girl reporter , is the only person to befriend her until Detective Shindo (YOSUKE NATSUKI), the reporter’s brother, takes her into protective police custody to guard her against a group of thugs, headed by Malness (HISAYA ITO) who are determined to kill her.

Naoko takes the prophetess to Mt. Fuji where Ghidra does battle with Godzilla, Rodan and Mothra, the massive caterpiller who comes to their assistance. 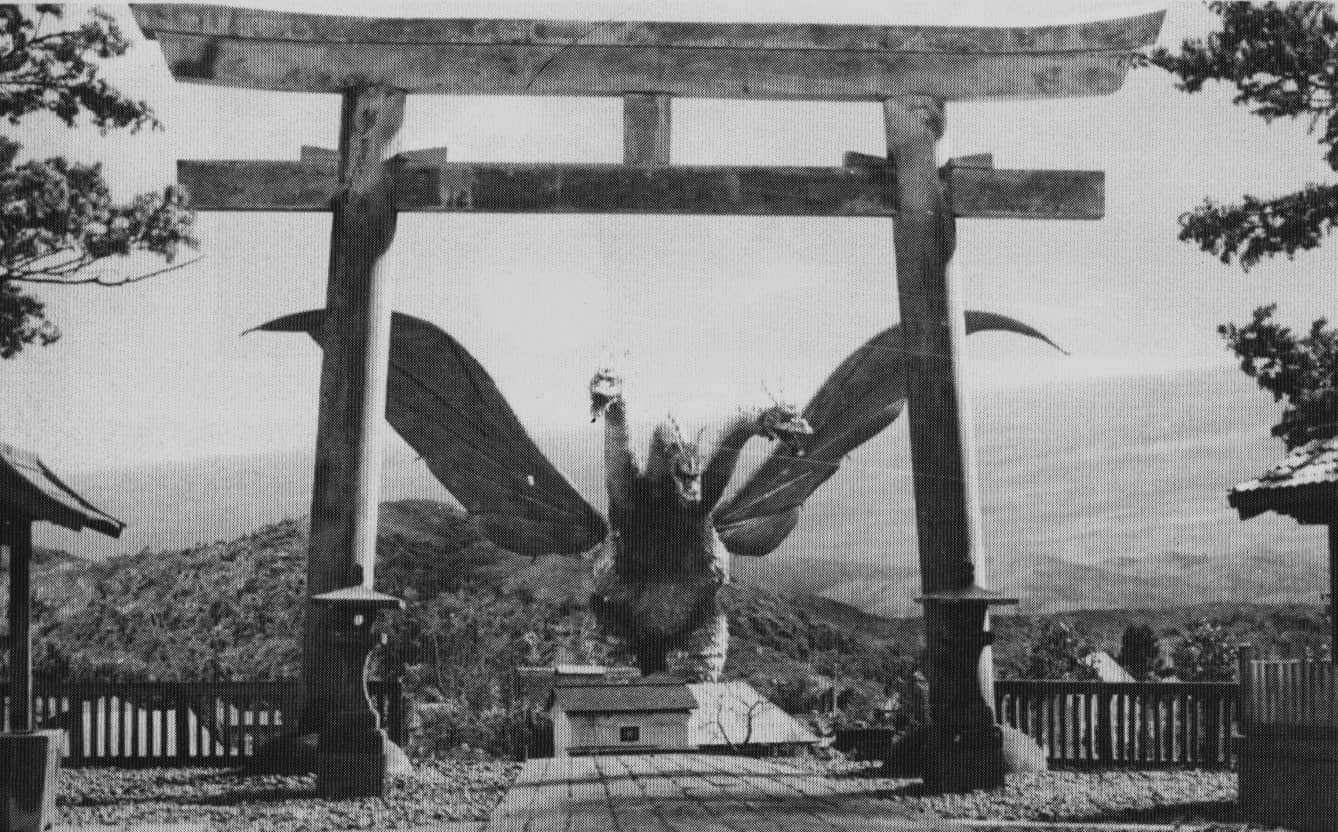 It was bound to happen! Forget the axiom that two heads are better than one. The very latest in world destroyers is one head up on it as proven in “Ghidrah – The Three Headed Monster” the new Tohoscope / Eastmancolor thriller which opens at the..(Insert Theatre Name) ..Theare on..(Insert Opening Date).. Those veteran one headed monsters, Godzilla, Rodan and Mothra are on hand to learn this new lesson the hard way.

Purely an outer space product, Ghidrah comes equipped with four legs (?), a set of coliseum size wings and multiple mouths that spew out three times as much destruction at the crack as the earth born monsters can do singly in a month of Sundays. The obvious solution is for Godzilla, Rodan and Mothra to stop tearing at each other’s throats long enough to put their combined heads together to drive the foreigner out of their territory, which means our of this world.

Shinichi Sekizawa, an expert on the extra-curricular activities of delinquent monsters, conjured a screenplay which affords Godzilla and Rodan with scenes to exhibit their individual specialties, than adding Mothra to combine their talents for the inevitable showdown with Ghidrah on the slopes of Mt. Fuji. The built-in violence of each contestant automatically brings about a smash climax when irresistible forces meet an immovable object and the earth literally trembles from the impact.

“Ghidrah – The Three Headed Monster” was produced by Tomoyuki Tanaka for the Toho Company. A Walter Reade-Sterling presentation, it is being released through its Continental Distributing Division which hasto acknowledge that three heads are better than one. 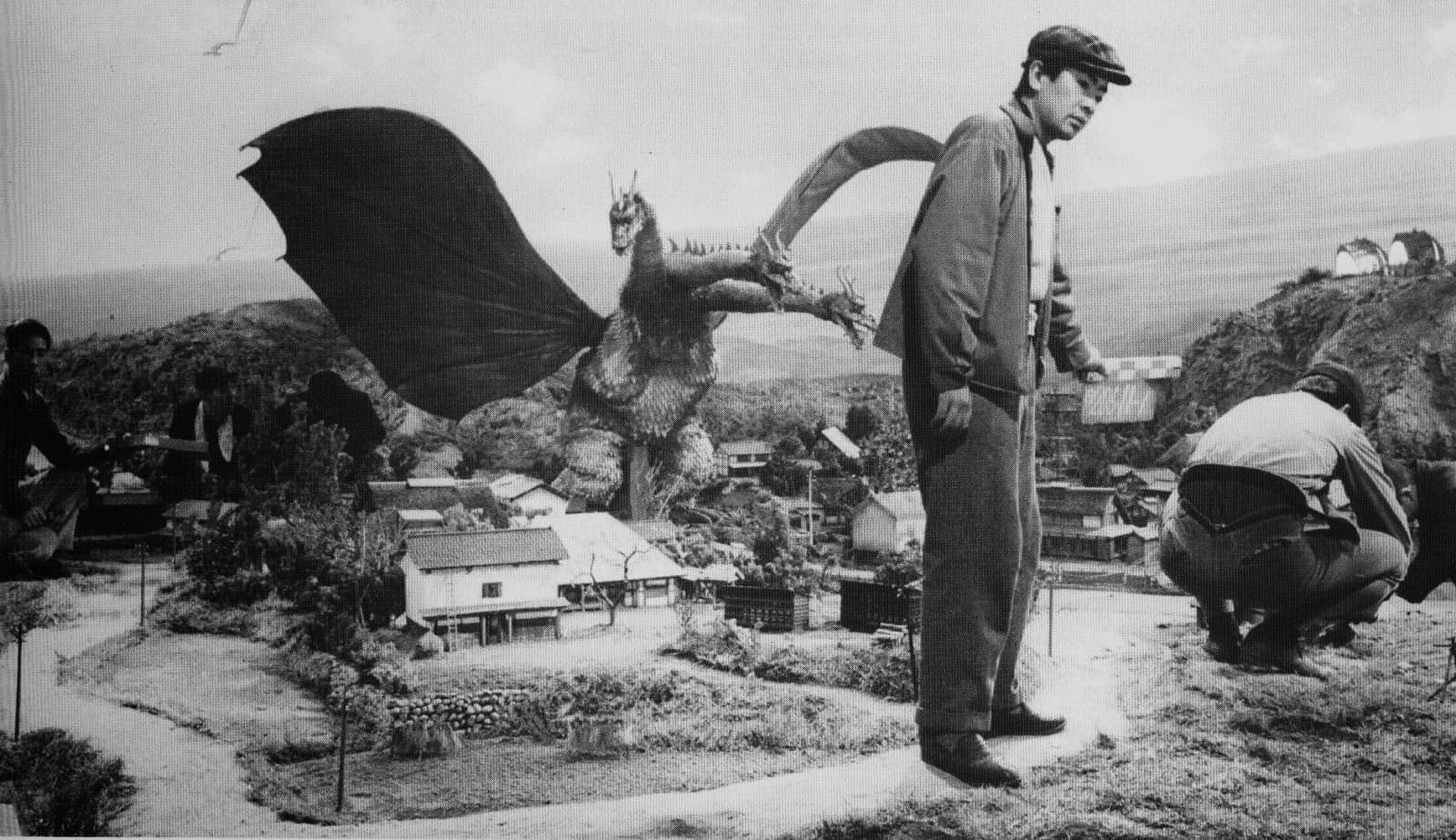 It’s not the leaders of nations who gather for a Summit Meeting at Mt. Fuji to save the world, but three infamous monsters….Godzilla, Rodan and Mothra..when they attempt to conquer an “outsider” in “Ghidrah..The Three Headed Monster” the new Tohoscope / Eastmancolor thriller which opens at the…(Insert Theatre Name)..Theatre on….(Insert Opening Date)…
Each a specialist in destruction, it takes a bit of doing on the part of strategists to convince the world levelers that their own existences are threatened by the arrival from outer space of a behemoth that has three heads working for it and some new intergalactic techniques to use in wiping out a planet. Once united in a common cause, the monsters whip up the most incredible battle scenes yet to be seen on the screen.

Master special effects creator, Eiji Tsuburaya, is again responsible for the action which calls for the realistic destruction of ships at sea, the city of Yokohama and villages unfortunate to be in the path of the havoc-bent monsters. Directed by Ishiro Honda, renowed for his contributions to this specialized field of science fiction motion picture making, “Ghidrah – The Three Headed Monster” was produced by Tomoyuki Tanaka for the Toho Company. It is being released by Continental, a division of Walter Reade-Sterling, Inc.

“Ghidrah – Three Headed Monster” Fiction Or Fact?
“Ghidrah – The Three Headed Monster” the Eastmancolor thriller which opens at the…(Insert Theatre Name)…Theatre on….(Insert Opening Day)…, brings up a reverse question, is it fiction or fact?
“Way out” science fiction magazines and cartoons of a decade or two ago have been proven to be amazingly accurate in predicting the future. Today, they are being examined with a new respect. Too many of their space predictions have developed from fiction to fact.
Two veterans of the science fiction field director Ishiro Honda and special effects expert Eiji Tsuburaya have been making motion pictures which deal with monsters created by the imbalance of nature through the radio-active results of the atom and hydrogen bombs. According to them, man’s experimentation with the inner secrets of the Universe created a breed of monsters such as Godzilla, Rodan and Mothra. Enlarged beyond human imagination, they have inflicted their monstrosities upon trembling peoples, cities and nations. Nuclear defense devices used against them strengthens rather than diminishes their powers. The latest of the teams fertile imaginations deals with a meteorite which manages to pierce earth’s atmosphere without being consumed by the friction. Once settled on the new planet, it cools off and goes through an incubation period. The disturbed elements of nature are the midwife to the strangest creature yet to be born on earth. The metallic shell splits in half and a tremendous fireball roars into the sky becoming GHIDRAH, the monster to end all monsters. Equiped with four legs (again..?), coliseum sized wings and three heads, no spanking is necessary for it to breath out fiery flames from each of its mouths as it surveys a new world to ravage.
Like the radio-active fallout which can have freakish genetic effects on humans, could a disruption caused by man-made satellites and space crafts wandering into space cause a shift in the solar order of wandering meteorites so that they are diverted to a new gravitic earth force? If so are they capable of bringing foreign life to this planet?
The reality of that threat is yet to be seen. However, the Toho Production deals with the problem as if it has already occured. They have lined up three of earth’s most formidable monsters…Godzilla, Rodan and Mothra ..to challenge the intruder from space. Born to destroy anything that stands in their paths, their showdown with Ghidrah is fore-ordained. Technically and dramatically, “Ghidrah – The Three Headed Monster” is the company’s most ambitious project to date.
Filmed in Tohoscope. “Ghidrah – The Three Headed Monster” was produced by Tomoyki Tanaha (Tomoyuki Tanaka) and is being presented by Walter Reade-Sterling through its Continental Distributing Division.
These three articles come directly from the movies press book that was printed in 1965. I find it amazing how it is mentioned more than once that Ghidrah has four legs, though it doesn’t, and how the cast and producer’s names are often misspelled. I guess that is just how it went back in the 1960’s.