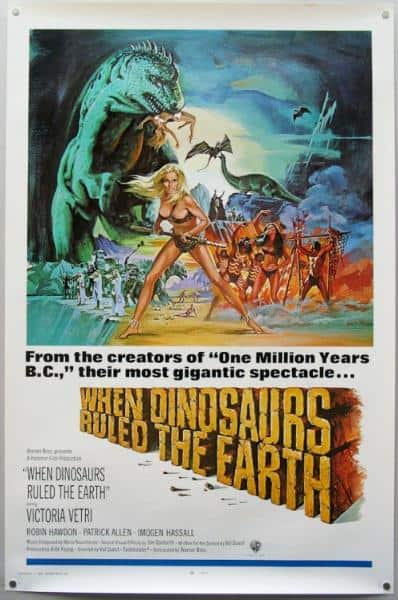 As many of you may or may not know collecting classic
movie posters, lobby cards and photographs is a real
passion of mine. I often times spend hours rummaging
through thrift stores, antique malls, flea markets and yard
sales looking for authentic movie related items. I have put
together quite a collection and one day I hope to get
everything framed and up on my walls.That being said, I woke up this morning with monster
movie posters on my mind so I decided to post a
collection of some great ones here for all to enjoy.What makes for a great monster movie poster? Well a
great monster is a good start but as you can see from
some of the examples here a great work of art can
sometimes make a bad monster look good. Of course that
is the general idea isn’t it? After all the sole purpose for
these posters were to put butts in theater seats.

Another great element that most great monster movie
posters share is a sexy damsel in distress. Monster plus
half-naked woman means box office gold … or so was the
general idea during the golden age of monster films.

Would you want to see this movie? Oh, hell yes! 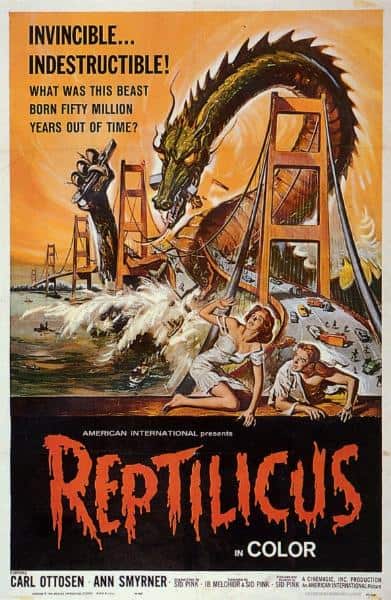 A great poster here! A giant dragon taking out the Golden
Gate Bridge. Too bad the movie didn’t live up to this
artwork.Info:

Reptilicus, a giant monster film about a fictional prehistoric
reptile, is a Danish-American co-production, produced by
American International Pictures and Saga Studios, and is
upon close examination two distinctly different films helmed
by two different directors.

The original version, which was shot in Danish was directed
by Danish director Poul Bang and released in Denmark on
February 25, 1961.

The American version, which was in English with a nearly
identical cast, was directed by the film’s American
producer-director Sidney W. Pink; this version was initially
deemed virtually unreleasable by American International
Pictures and had to be extensively reworked by the film’s
Danish-American screenwriter, Ib Melchior, before being
finally released in America in 1962. 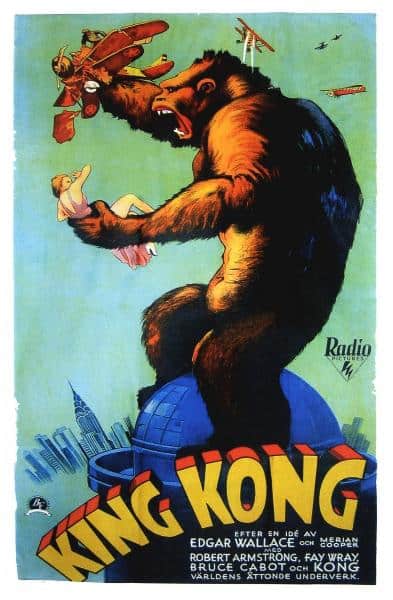 Of all the zillions of King Kong posters that were produced
this one has always been my favorite. Great colors, great
action pose, what’s not to love?Info:

King Kong is a Pre-Code 1933 fantasy monster adventure
film co-directed by Merian C. Cooper and Ernest B.
Schoedsack, and written by Ruth Rose and James
Ashmore Creelman after a story by Cooper and Edgar
Wallace. The film tells of a gigantic island-dwelling
gorilla-like creature called Kong who dies in an attempt to
possess a beautiful young woman. The film stars Fay
Wray, Bruce Cabot and Robert Armstrong and opened in
New York City on March 2, 1933 to good reviews. Kong
is distinguished for its stop-motion animation by Willis
O’Brien and its musical score by Max Steiner. The film has
been released to video, DVD, and Blu-ray, and has been
computer colorized. In 1991, the film was deemed
“culturally, historically and aesthetically significant” by the
Library of Congress and selected for preservation in the
National Film Registry. 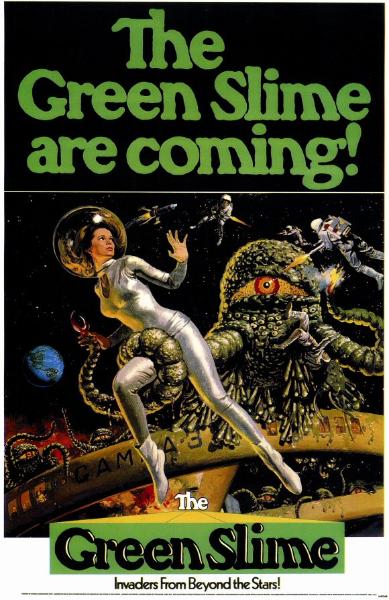 Again everything you want in a monster movie poster. A
sexy girls, great monster art and great action. The movie …..
well not so good, but one of my faves none the less.Info:

The Green Slime (ガンマー第3号 宇宙大作戦, Ganmā
Daisan Gō: Uchū Daisakusen, aka Gamma 3: Operation
Outer Space) is a 1968 science-fiction film produced by
MGM in the United States and shot in Japan at the studios
of Toei Company by director Kinji Fukasaku. The film was
spearheaded by the same creative team who produced
similar Italian outings including Wild, Wild Planet, Ivan
Reiner and Walter Manley.

Two great monsters combine for one great poster. There’s
Frankie carrying off a woman in her night-gown …. ya gotta
have that …. and you have The Monster and The Wolf
Man trying to kick the crap out of each other. Nuff said.Info:Frankenstein Meets the Wolf Man, released in 1943, is an
American monster horror film produced by Universal
Studios starring Lon Chaney, Jr. as the Wolf Man and Bela
Lugosi as Frankenstein’s monster. The movie was the first
of a series of “ensemble” monster films combining
characters from several film series. This film, therefore, is
both the fifth in the series of films based upon Mary
Shelley’s Frankenstein and a sequel to The Wolf Man.
Frankenstein 1970

What can I say about this one? Great image of a sexy
woman cowering in fear in the shadow of a truly grotesque
looking Frankenstein silhouette. This one is just about
perfect.Info:Frankenstein 1970 is a 1958 science fiction horror film,
starring Boris Karloff and Don ‘Red’ Barry. This
independent film was directed by Howard W. Koch, and
its alternative titles were Frankenstein 1960 and
Frankenstein 1975. Released on a low budget, the film was
originally intended to be named Frankenstein 1960 but it
did not sound futuristic enough. In October 2009, Warner
Brothers released the DVD “Karloff & Lugosi Horror
Classics” which includes Frankenstein 1970 as one of the
four films and features an audio commentary by co-star
Charlotte Austin and historians Tom Weaver and Bob
Burns.
Destroy All Monsters

This is pure monster heaven! You have just about every
great Japanese movie monster in one poster. Japanese
monster posters are always amazing and this one stands
out on top!Info:

Destroy All Monsters, released in Japan as Charge of the
Monsters (怪獣総進撃, Kaijū Sōshingeki), is a 1968
Japanese science fiction kaiju. The ninth in Toho Studios’
Godzilla series, it was directed by Ishirō Honda with
special effects by Sadamasa Arikawa (supervised by Eiji
Tsuburaya.) This is the fifth film to feature Mothra, third to
feature King Ghidorah, fourth to feature Rodan, and
second to feature Gorosaurus, Anguirus, Kumonga,
Manda, Minilla, Baragon, and Varan. This film is also
considered that last of the more classical era of Showa
films.

Bride of the Monster

Great classic vampire poster! Again the reoccurring theme
of the monster (or in this case vampire) carrying off a rather
buxom maiden. What’s with the meatball with tentacles?Info:

Bride of the Monster is a 1955 sci-fi horror film starring
Bela Lugosi, along with Tor Johnson, Tony McCoy and
Loretta King Hadler. It was produced, directed and
co-written by Edward D. Wood, Jr.

A sequel, entitled Night of the Ghouls, was finished in
1959, but due to last-minute financial problems, was not
released until 1987.

Blood From the Mummy’s Tomb

With this one you don’t even need a mummy in the poster
to sell the film. A severed hand choking a buxom victim …
that’s all you really need. I love the look of terror on the
woman’s face. Great poster!Info:

Blood from the Mummy’s Tomb is a 1971 British film
starring Andrew Keir, Valerie Leon, and James Villiers.
This was director Seth Holt’s final film, and was adapted
from Bram Stoker’s novel The Jewel of Seven Stars. The
film was released as the support feature to Dr. Jekyll and
Sister Hyde. 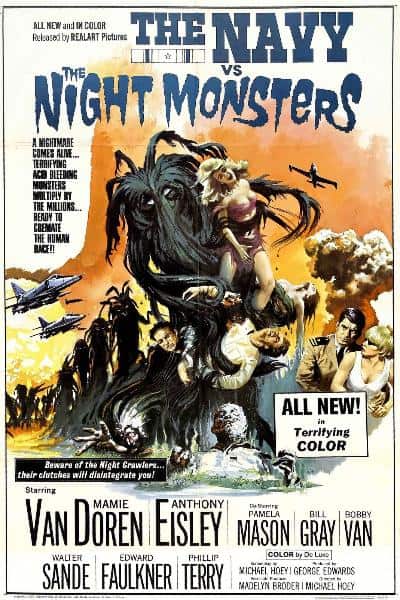 To save time I decided to lump these three posters together because what can be said for one can be said for all three. Sub-par monster movies with great posters! All three contain the classic monster menacing sexy woman theme,
except for “The Navy vs The Night Monsters” where that sexy woman is none other than Mamie Van Doren. In fact all that the poster really needs is MAMIE VAN DOREN in huge letters with a picture of her in her underwear. No
monster …. just MVD. Anyway it’s a great poster with jets and a-bombs going off plus a bunch of killer trees on a rampage.More movie posters to come in future articles so stay tuned!
Share
Print Post