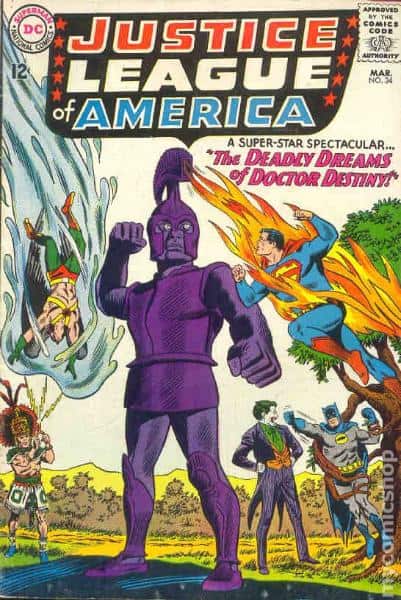 From: DC Comics / My Comic Shop

Synopsis for “The Deadly Dreams of Doctor Destiny!”

Members of the Justice League have been having strange dreams: Batman and Hawkman both dream of the Joker and Chac fighting in
the Amazon. When the two heroes try to stop their foes, Batman is suddenly stuck with a ring which gives him super speed, and
Hawkman a pair of gloves that make him only able to fly with his hands. However, in spite of these handicaps, they manage to defeat
their foes. Superman dreams of fighting a giant centurion warrior that breaks out of an ancient casket. During the fight however he’s
stuck with a pair of glasses which makes him immune to Kryptonite but vulnerable to fire and unable to effect anything yellow. In spite
of this set back, Superman defeats his dream foe. While in yet another dream, Wonder Woman and Atom work together to fight a
giant shell terrorizing the ocean. During the fight Atom is stuck with an antenni that forces him to see things in X-Ray vision, and
Wonder Woman a mask which broadcasts what she is about to do. They also manage to defeat their dream foe.

The next day these JLA members show up at JLA headquarters to find Snapper Carr upset that the JLA went on a mission and didn’t
tell him. When the JLA are confused by this, Snapper shows him new items that appeared in the trophy room which resembled the
items in their dreams. As they are explaining everything to Snapper, suddenly the same events from their dreams are reported on the
radio.

As the JLA rush off to stop their opponents, we learn that the mastermind behind it all is Dr. Destiny, who has found a way to make his
dreams become reality and has been orchestrating the whole event. Having learned how the JLA members would foil each attack, he
would now try something different to defeat the JLA.

However, in spite of the fact of trying to use different methods to stop the JLA members with their handicaps, they manage to stop all
the threats. Realizing that Dr. Destiny may have been behind the whole thing, the JLA visit him in prison. When Atom punches Destiny
out, making the various devices disappear, it confirms their suspicions and they force Destiny to see a psychiatrist to prevent him from
using his dreams to attack the JLA again.