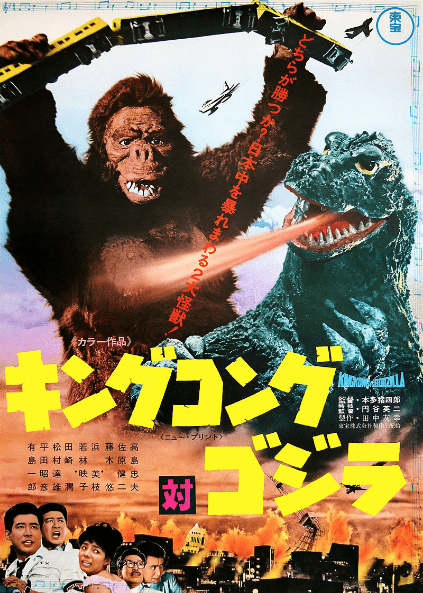 Recently I have written a lot about how the 1933 American classic
monster movie “King Kong” influenced Asian film makers. Right from
the moment that “Kong” came on the scene, the Japanese developed
a love for the monster. Almost imeadiately Shochiku produced their
own clone of the film, “Wasei Kingu Kongu”, and five years later made
“Edo Ni Arawarita Kingu Kongu”. Both films featuring a man in a
gorilla costume as “Kong.”

It is known fact that the Meriam C Coopper film “King Kong” had a
profound influence on both Ishiro Honda and Eiji Tsuburaya, two men,
who would decades later, combine their talents to create a cinematic
monster icon of their own known as “Gojira” (Godzilla).

The film had a special place in the development of Japan’s premier
special effects legend Eiji Tsuburaya. Only a camera man at the time,
Tsuburaya, optained a 35mm print of “King Kong” and began to study
it frame by frame. From his studies the future special effects genious
was able to disect the film and learn how each effect was achieved. It
was this film, above many others, that inspired him to work on movie
effects.

The idea of pitting King Kong against another monster came about in
1960, when Willis O’Brien, the man behind the stop-motion effects in
the original film, had developed his own sequel. Godzilla, however,
was not the monster that O’Brien had wanted Kong to fight.
Frankenstein was the monster of choice for this new movie idea, but
there was all kinds of hurdles that would have to be overcome if the
classic Universal horror icon was to be used.

O’Brien believed that he would have no trouble securing the rights to use the name “King Kong” from the now defunct RKO, but he
was worried about getting the rights to use “Frankenstein” from Universal. To get around this, the name was changed twice during
development, first to “The Ginko”, and then finally to “Prometheus”, an alternate name for the monster from Mary Shelley’s original
novel.O’Brien peddled his “King Kong vs Prometheus” film idea to all the major studios in Hollywood. Ultimately it was the effects man’s
insistance that stop-motion animation, a long and expensive process, be used, that turned the studios off.

There are major differences between the version of “King Kong
vs Godzilla” that was released in Japanese movie theaters and
the one that was shown in the US. The original Japanese
version, which was penned by Shinichi Sekizawa, was a fast
paced humorous satire about commercialization, something
that was lost on Beck, who produced the Americanized version.

Beck inserted scenes with American actors, which were
intended to give the film a serious tone. These scenes,
combined with the origianal satirical Japanese footage, just
succeeded in making the film seem awkward.

One thing that was not changed from the original Japanese
version, was the ending. For decades it was always assumed
that in Japan audiences witnessed Godzilla rising from the
depths and swimming away. That was never the case. In both
versions it is indeed Kong the emerges the victor, and swims
for home.

O’Brien was only able to convince former Universal producer, Jon Beck,
that his idea was viable. Beck, like O’Brien before him, took the idea from
studio to studio, again no takers. It wasn’t until he started looking outside
the United States, did he find an interested party, Japan’s famed Toho
Studios.

Toho wasn’t interested in using Frankenstein, but due to undoubted
influence from both Tsuburaya and Honda, they expressed an interest in
making a King Kong film. The studio had been looking for a long time for a
vehicle to bring back Godzilla, so the project seemed like a marriage
made in heaven.

Beck ultimately caved to Toho’s request, and changed Frankenstein to
Godzilla, selling the idea to the studio. He also managed to get Toho to
pay for the rights to use “King Kong” in the film, a price that was so high
that it ate up a good chunk of the money that was allotted for the production.

With both monsters ‘locked in’, Toho began production on what would end
up to be the most popular monster movie in their studio’s history.

The cost of using “Kong” did, as a mentioned before, eat up a lot of the
film’s budget. Several shortcuts had to be made to fit the film under this
reduced financial cap. Filming had to be moved from Sri Lanka to Oshima
Island, located just off the coast from Tokyo. The King Kong costumes
were not as detailed as many of the monsters suites used in prior films.
Puppets of various sizes were even utilized for some of the effects shots.

On the other hand, the Godzilla suite design was a major improvement
over what was used in both “Godzilla” and “Godzilla Raids Again.” This
time around “Big G” sported a more reptilian look, something more in
line with its dinosaur ancestry. The new design would be the basis of all
the Godzilla suites that would proceed it throughout the 1960s.  In fact,
this is my favorite Godzilla design of all time. I just think it looks more like
a dinosaur than any of the others. Hey, its all subjective, and yes, I do like
the GMK design as well. I’m just mentioning that, because I know some
fan is going to call me on it. Better to beat them to it, I say.  Despite the
budget restrictions, Tsuburaya produced some his best miniature sets for
the film.

Mr. Tako, head of Pacific Pharmaceuticals, is frustrated with the
television shows his company is sponsoring and wants something to
boost his ratings. When a doctor tells Tako about a giant monster he
discovered on the small Faro Island, Tako believes that it would be a
brilliant idea “…with a punch” to use the monster to gain publicity. Tako
immediately sends two men, Sakurai and Kinsaburo, to find and bring
back the monster from Faro.

Meanwhile, the American submarine Seahawk gets caught in an iceberg.
Unfortunately, this is the same iceberg that Godzilla was trapped in by the
Japanese Self-Defense Forces back in 1955, and the submarine is
destroyed by the monster. As an American rescue helicopter circles the
iceberg, Godzilla breaks out and heads towards a nearby Soviet Arctic
base. The base alarm sounds as they deploy everything they have
against him. Tanks were sent to stop Godzilla’s advance, but to no avail.
Godzilla advances, now closer to the base. 12 rapid-firing four-turreted
artillery cannons, despite their firepower and firing rate, had no effect
either. Godzilla, now at the coastline of the base, fires his atomic ray at
the tanks’ defensive line, melting them instantly. The rest of the tanks
retreat, now leaving the bases defenses to deal with him. The base itself,
of course is ineffective against Godzilla. He continues moving inland,
razing the base to the ground, and sends the tank armory up in flames.
Godzilla’s appearance is all over the press, making Tako furious.

Meanwhile on Faro Island, a Giant Octopus attacks the native village. The
mysterious Faro monster is then revealed to be the giant gorilla King
Kong and he arrives and defeats the tentacled menace. Kong then drinks
some red berry juice, gets drunk, and then falls asleep. Sakurai and
Kinsaburo place Kong on a large raft and begin to transport him back to
Japan. Back at Pacific Pharmaceuticals, Tako is finally glad because
Kong is now all over the press instead of Godzilla. Mr. Tako arrives on
the ship transporting Kong, but a JSDF ship stops them and orders them
to return Kong to Faro Island. Godzilla had just come ashore in Japan
and destroyed a train, and the JSDF doesn’t want another monster
entering Japan. Unfortunately, during all this, Kong wakes up from his
drunken state and breaks free from the raft. Reaching the mainland, Kong
meets up with Godzilla in a valley and Tako, Sakurai, and Kinsaburo have
difficulty avoiding the JSDF to watch the fight. Eventually they find a spot.
Kong throws some large rocks at Godzilla, but Godzilla shoots his ray at
Kong’s chest, forcing the giant ape to retreat.

The JSDF desperately tries everything to stop Godzilla from entering
Tokyo. In a fielded area outside the city, they dig a large pit laden with
explosives and try to lure Godzilla into it. They succeed and set off the
explosives, but Godzilla is unharmed and crawls out of the pit. They next
string up a barrier of power lines around the city filled with a 1,000,000
volts of electricity (300,000 volts had been tried in the first film, but failed
to turn the monster back). The electricity is too much for Godzilla, who
then moves away from the city towards the Mt. Fuji area. Later at night,
Kong approaches Tokyo. He tears through the power lines, feeding off
the electricity which seems to make him stronger. Kong then attacks
Tokyo and holds a woman from a train, named Fumiko, hostage. The
JSDF explode capsules full of the berry juice from Faro Island and knock
out Kong. Tako approved of this plan because he “…didn’t want anything
bad to happen to Kong.” The JSDF then decide to transport Kong via
balloons to Godzilla, in hope that they will fight each other to their deaths.

The next morning, King Kong is dumbo-dropped onto the summit of Mt.
Fuji from the balloon air-lift, meets up with Godzilla and the two begin to
fight. Godzilla has the advantage at first, eventually knocking Kong down
with a vicious drop kick, and battering the monstrous ape unconscious
with powerful tail attacks to his forehead. When Godzilla tries to kill Kong
with his ray, an electrical storm arrives and revives Kong, giving him the
power of an electric grasp. The two begin to fight again, with the
revitalized Kong swinging Godzilla around by his tail, shoving a tree into
Godzilla’s mouth, and judo tossing him over his shoulder. The brawl
between the two monsters continues all the way down to the coastline.
Eventually the monsters tear through Atami Castle and Kong drags
Godzilla into the Pacific Ocean. After an underwater battle, only King
Kong emerges from the water and begins to slowly swim back home to
Faro Island. As Kong swims home, onlookers aren’t sure if Godzilla
survived the underwater battle, but speculate that it was possible.