For the studios’ thirty-fifth anniversary, Toho would team up with Rankin
Bass to produce a live-action version of their popular animated TV
series. Director Ishiro Honda would jump at a chance to work on a
tribute to the 1933 film, “King Kong”, which had been a major
inspiration to him. (Kong was also the inspiration for Gojira as well.)
The script, written by Kaoru Mabuchi, would draw on several major
elements from the cartoon, including thr location of Mondo Island, the
Robot Kong, and the evil Dr. Who. Once again Eiji Tsuburaya was
called upon to create the intricate miniatures and special effects. As in
“King Kong vs Godzilla“, the Kong costume was created to make the
monster look friendly and like able. In fact a leftover suite from KK vs G
was used for scenes filmed in Toho’s famed water tank. Rankin Bass
kept a close eye on the goings on in Japan and elements had to be
approved before being filmed. The whole production would end up as
one of the studios most polished films.

An evil pair, Dr.Who and Madame Piranha, have developed a
mechanical replica of King Kong to dig for a highly radioactive mineral
in the area of the North Pole. They soon discover that their replica is
not cut out for the job and soon go on a quest for the real deal. They
use the young and lovely Susan Miller to trap the monster and take him
back to the mines. Of course Kong escapes and heads for Japan.
They always head for Japan. Who and his henchmen activate the
Robot Kong and set sail to recapture Kong. The Mech-Kong kidnaps
Miller and takes her to the top of Tokyo Tower as bait. The two Kong’s
do battle and the Robot and his masters are destroyed by the
rampage that is King Kong. Kong then wastes little time heading back
home.

The film opened in the United States in June 1968 on a double-bill with
the Don Knotts comedy, The Shakiest Gun in the West Contemporary
American reviews were mixed. New York Times film critic, Vincent

Canby gave it a particularly insulting review, calling Toho’s Kong an “Uncle Tom,” and commenting, “The Japanese… are all thumbs
when it comes to making monster movies like ‘King Kong Escapes.’ The Toho movie makers are quite good in building miniature
sets, but much of the process photography—matching the miniatures with the full-scale shots—is just bad… the plotting is hopelessly
primitive…” The July 15, 1968 Film Bulletin, however, gave it a more positive review, saying “Grown-ups who like their entertainments
on a comic-strip level will find this good fun and the Universal release (made in Japan) has plenty of ballyhoo angles to draw the
school-free youngsters in large numbers…”

Trivia Compiled By: Ken Hulsey
Sources: IMDB / WikipediaJapanese film makers have been obsessed with “King Kong” since his first
screen appearance in 1933. Almost immediately “Kong” inspired films
began popping up in theaters throughout the land of the rising sun.
Unfortunately these films are lost and mostly forgotten.

A couple of decades later when Tomoyuki Tanaka was looking to make a
monster film of his own after seeing “The Beast From 20,000 Fathoms” the
idea for a Japanese “King Kong” film would be revisited. Most people never
knew that originally “Godzilla” wasn’t going to be a dinosaur at all but a
fire-breathing gorilla. Alas it’s true. Of course that idea, plus the idea of
making “Big G” a giant octopus, was scrapped for what would become
everyone’s favorite mutant behemoth, which ultimately proved to be a far
better choice.

Who in the hell would want to see a giant fire-breathing gorilla movie? Okay,
maybe I would but most people wouldn’t.

Toho would eventually make two “King Kong” films, one being “King Kong vs
Godzilla” and the other “King Kong Escapes”. Despite what a lot of people
believe the two films are in no way connected to each other in any way. That
is to say “KK Escapes” is not a sequel to “KK vs G”.

King Kong Escapes, released in Japan as Kingu Kongu no Gyakush,
(literally “King Kong’s Counterattack”), is a Japanese/American tokusatsu
film. A co-production from Toho and Rankin/Bass, it was released in Japan
in 1967, and in the United States by Universal Studios the following year.

The film was an adaptation of episodes of Rankin/Bass and Toei
Animation’s The King Kong Show cartoon series. As with King Kong vs.
Godzilla, Eiji Tsuburaya served as director of special effects.

Two costumes of King Kong were made. The arms of the first costume were
very long, so Haruo Nakajima’s hands did not reach those of the costume. He
had to grasp onto sticks that were attached to the hands of the costume. He
wore a second costume with shorter arms whenever they were shooting
footage of King Kong battling other monsters.Even though Linda Miller was an American that spoke fluent English, her
voice was dubbed by Julie Bennett.

This film was a live action tie-in to the animated TV series King Kong, which
was also produced by Rankin/Bass Productions.

In the film, Doctor Hu is trying to get some Element X by digging into the land
under the ice at the North Pole. There is no land under the North Pole, but
there is a lot of it under the South Pole.

During some of the North Pole scenes, Dr. Hu’s men cast shadows on the
painting of the “distance” (mainly snow-capped mountains) on the studio set.

The film opened in the United States in June 1968 on a double-bill with the
Don Knotts comedy The Shakiest Gun in the West Contemporary American
reviews were mixed. New York Times film critic Vincent Canby gave it a
particularly insulting review, commenting, “The Japanese…are all thumbs
when it comes to making monster movies like ‘King Kong Escapes.’ The
Toho movie makers are quite good in building miniature sets, but much of the
process photography—matching the miniatures with the full-scale shots—is
just bad…the plotting is hopelessly primitive…”

Outside of the Japan and the U.S, the film received a wide release in most
International markets where it went by different titles. The film was released in
Germany as King-Kong, Frankensteins Sohn (King Kong: Frankenstein’s
Son), in Belgium as La Revanche de King Kong (The Revenge of King
Kong), in Italy as King Kong il gigante della foresta (King Kong, The Giant of
the Forest), in Turkey as Canavarlarin Gazabi (Wrath of the Monsters), in
Mexico as El Regreso de King Kong (The Return of King Kong), in Finland
as King Kong kauhun saarella (King Kong on the Island of Terror), and in
Sweden as King Kong på skräckens ö (King Kong on Terror Island)

Toho had wanted to use King Kong again after this film. King Kong was
included in an early draft for the 1968 film Destroy All Monsters but was
ultimately dropped due to the fact that Toho’s licence on the character was
set to expire. Toho managed to get some use out of the suit though. The suit
was reused to play the character “Gorilla” in episode #38 of the Toho giant
superhero show Go! Greenman. The 3 part episode titled Greenman vs.
Gorilla aired from March 21, 1974 through March 23, 1974. 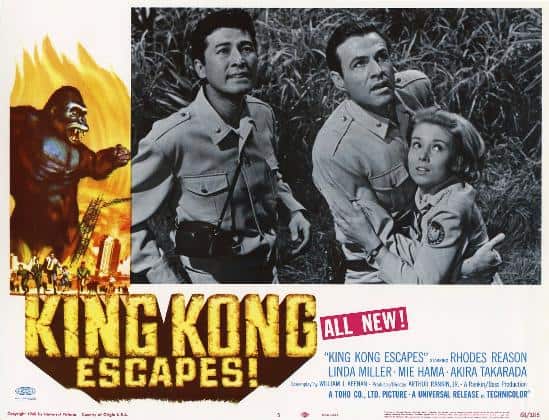 According to our giant monster correspondent Avery Guerra, Rhodes
Reason, the star of “King Kong Escapes” and the Star Trek episode
“Bread and Circuses (1968)”, lost his battle with lymphoma cancer the
day after Christmas. According to sources the 84-year-old actor passed
peacefully in his sleep at his home in Palm Springs, CA.Rhodes Reason was born in Glendale, California on April 19, 1930. He is
the younger brother of Rex Reason. Rhodes made his professional debut
at the age of 18 in the play Romeo and Juliet under the direction of
Charles Laughton. His career has spanned nearly 40 years and he has
appeared in over 230 roles in television, movies and stage. He starred in
the series White Hunter (1957) in England, and was cast as Sheriff Will
Mayberry in the TV series Bus Stop (1961). His numerous guest
appearances have included Death Valley Days (1952), Here’s Lucy
(1968), Maverick (1957), 77 Sunset Strip (1958), The Time Tunnel
(1966), Perry Mason (1957), Star Trek (1966), and many more. In the
early 1980s he starred in the Broadway musical “Annie”, playing Daddy
Warbucks for nearly three years. He is an active member of the Academy
of Motion Picture Arts and Sciences..
Share
Print Post