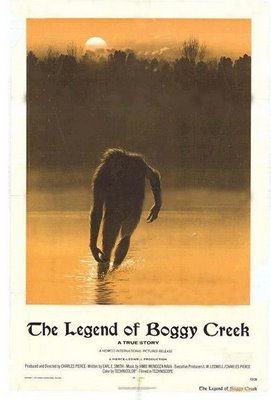 I was inspired to go into my DVD collection this weekend and pull out my copy of “The Legend of Boggy Creek” after I had watched the “Monster Quest” episode on the “Fouke Monster” or “The Swamp Stalker of Boggy Creek” as it was referred to on the program, earlier in the week.

Monster Quest showed several scenes from Charles B. Pierce’s movie during the episode, so I dusted off my copy a put it the DVD player for the family to enjoy. I always thought of the film a great scary movie, but after I went and did some research about it, I gained even more respect for Pierce and the movie he created.

In 1972 Charles Pierce, an ad salesman from Texarkana, borrowed $160,000 from a friend who owned a car dealership, to make a movie about a local legend in Arkansas, that he had heard about growing up. Armed with a hand-held camera, and the local residents, who played themselves, Pierce set out to create a pseudo-documentary about recent encounters with a Bigfoot-like creature in and around the small town of Fouke.

Amazingly enough, Pierce, with no experience at making movies, was able to create a very believable and scary movie. His amateur actors, who obviously drew inspiration from their real-life encounters, display such fear, that the viewer really gets taken in by their raw emotion.

Pierce’s camera work and editing really creates a genuine feeling of terror. His wisdom in only showing the monster from a distance, and in the shadows, adds to the mystery and the overall eerie feeling of the film.

It is amazing that an amateur film maker, like Pierce, was able to master so many truly scary film techniques in his first attempt at making a movie. 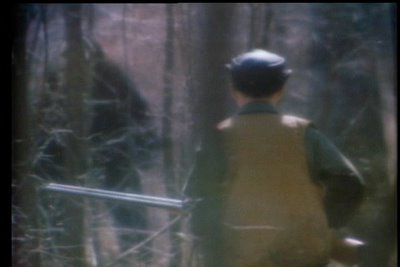 The movie starts out, documentary style, explaining the history of the town of Fouke, and its past run-ins with the monster.

There are several scenes that show the swamps around Boggy Creek. This really works well in setting the mood for the film, because the area is truly creepy looking. In fact I would dare anyone to find a scarier looking area in the United States.

As the film proceeds there are several reenactments of past encounters with the Bigfoot-like “Fouke Monster.” Most of these are fairly benign, chance sightings by hunters mixed an occasional animal attack. Despite looking for a meal the monster stays hidden and avoids any human contact.

For the most part, the monster doesn’t do anything to menace anyone…..well….that is until a young boy shoots it a couple of times. That’s when the creature starts to view the residents of Fouke as adversaries.

Hunting parties are organized to try and kill the creature, but all they do is drive the beast away from the area for eight years.

It is at this point the Pierce makes his only error in producing the film. Two of the most awful country songs ever composed are added to stretch the length of the film. One is a ballad about how, “lonely”, the monster is, and the second is about a local boy who likes to go camping and fishing in the swamp. These tunes sound like John Denver at his worst. I strongly recommend hitting “fast-forward” at this point.

Don’t worry the film gets better after that.

When the monster returns, he returns with a vengeance. Animals once again begin to disappear and people begin to be attacked. It is obvious that the monster no longer has any fear of man.

A group of young High School girls are terrified when the monster interrupts their slumber party by rocking their mobile home and thrashing everything in sight.

The young ladies, again the actual victims, truly look terrified as they all try to load a shot-gun to protect themselves. Again another scene that was pulled off flawlessly by Pierce.

The film comes to a climax with the story of two young families that move into a house that is located near Boggy Creek together.

When the husbands go off to work the night shift, their wives are harassed by the monster, who tries to break into the house.

The next day, two visiting relatives discover giant tracks on the edge of the creek while fishing.

Later that night the creature returns and attacks one of the women by grabbing her through an open window. When the two men return from work, they find their families in a state of panic.

Armed with shot-guns, the men go out to find the monster. They mange to shot the creature several times. Believing that they have killed the beast they head for home. On the way back to the house one of the men is attacked by the creature, suffering several gashes and head trauma.

The family promptly rushes him to the hospital and moves out of the house the next morning.

Pierce’s amateur monster movie would gross over $20 million at the box office. That may not seem like much compared to today’s numbers, but to put it in perspective Fox’s “Escape From The Planet Of The Apes” grossed only $12 million the year before.

In fact, the film was such a hit it spawned two sequels, “Return to Boggy Creek” in 1977 and “The Barbaric Beast of Boggy Creek, Part II”. “Return” was not produced by Pierce and was a purely fictitious tale about a group of people who get lost in the swamp and are rescued by the monster. The film starred famed television actresses Dawn Wells (Gilligan’s Island ) and Dana Plato (Diff’rent Strokes).

Whether you believe in Bigfoot or not, “The Legend of Boggy Creek” is a great scary movie. It may even make a skeptic think twice about the subject. Charles Pierce was able to create a truly iconic film, one that has been coveted by both monster movie fans and cryptozoolgy enthusiasts for decades.

Here are some never before published photos from “The Legend of Boggy Creek”: 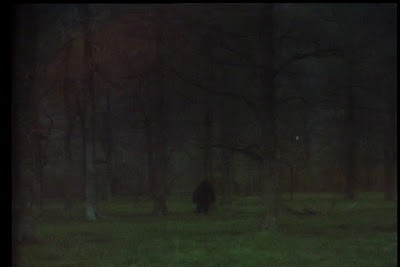