In 1997 Banpresto approached Go Nagai about creating an
advanced version of his famous mecha, Great Mazinger, for the later
stages of their Super Robot Wars video game. The design Nagai
came up with, Mazinkaiser, is arguably the most powerful mecha
ever created. The robot proved to be so popular that it was eventually
added to the Mazinger canon (storyline). In 1999 a seven episode
OVA (Original Video Animation) anime series was produced to tell
the origin of the mecha.

Many American fans may not be too unfamiliar with the Mazinger Z
storyline, which aired under the name Tranzor Z shortly after
Robotech became popular. Many American children also got to play
with a 3 foot tall Mazinger which was released as part of Mattel’s
Shogun Warrior line of toys in the late 1970s’. I know I had one and
so did most of my friends. In the original series Mazinger Z was
always pitted against some lame robot that was created by the
enemy of the Photon Energy Research Laboratory, Dr. Hell, whose
henchman (henchwoman?) Baron Ashura would always oversee the
attack. In typical Japanese superhero style the enemy robot would
always win through the majority of the fight until Mazinger Z would
unleash all its power and destroy it. I always wondered why Dr. Hell
never just built one robot and put it aside. Then built another robot
and put it aside and so on and so on till he had an army to kick
Mazinger’s butt?

In the Mazinkaiser series Dr. Hell finally got a clue. Baron Ashura
leads an army of nasty robots into battle against both Mazinger Z and
The Great Mazinger (a later advanced version of Mazinger Z) and
succeeds in scoring a victory. As the Great Mazinger is sent packing
the Mazinger Z is all but destroyed. .

The machines pilot Kouji Kabuto escapes and follows an automated signal to a hidden cave where he finds a holographic message
from his grandfather, Juuzou Kabato, who designed and built both Mazinger.

Dr. Hell rebuilds the Mazinger Z and sets out to destroy the Photon Laboratory. The Great Mazinger proves to be no match for the
army of lead by Ashura who is piloting the former defender of Japan. Just as all seems lost the enemy forces begin to be blasted
apart by an unseen mecha. Out of the smoke steps the Mazinkaiser piloted by Kabuto. 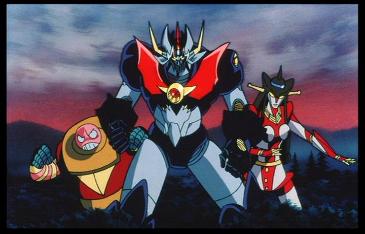 This new machine begins to run amok destroying everything in its path.
After the enemy forces had been vanquished the Mazinkaiser engages the
Great Mazinger! This new machine is far too powerful for the inexperienced
Kouji to control. He does manage to pull in the machines reigns just before
it begins to destroy the laboratory. It is no wonder that Juuzo Kabato felt his
creation was far too powerful and kept it secretly hidden. As the series
proceeds Kouji spends hours perfecting his piloting skills and eventually
learns to control the mighty Mazinkaiser enough to finally defeat Dr. Hell
and his minions.Mazinkaiser is a great mini-series, which combines badass robot fights
with plenty of comic relief and good amount of topless girls. Yes, this one is
geared for the guys. As a fan of the original Mazinger Z series I was very
pleased with the way this series continued that storyline, taking it further
and showcasing newer technology. As a fan of Japanese mecha, the Great
Mazinger especially, I was very impressed by the design of the
Mazinkaiser. It is the greatest of the greats hands down. I recommend this
one to anyone who ever fired missiles out of their Shogun Warriors hand in
an attempt to shoot their cat. Don’t pretend like you never tried it!