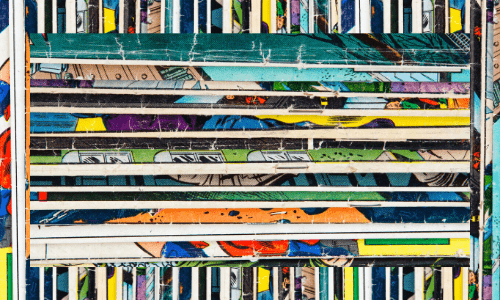 Top 10 Comics of All Time

It’s always complicated to make a list, especially when it comes to a list of something you’re passionate about. We have tried to make a list of the best comics in history, but to avoid bad rolls and, to be honest, to save ourselves disgust, what we have done has been to make an arithmetic average of lists prepared by experts. The result is very curious because it shows that most experts highlight many comics of the 80s. Although the results are predictable, they are still controversial because there are huge absences. It never rains to everyone’s taste.

Our favorite bearded man, Alan Moore, is the excellent screenwriter who managed to bring this collection to its peak. The swamp thing was a collection born in 1972 from a story created by Len Wein (screenplay) and Bernie Wrightson (drawing) in 1971. The series was published until 1976 and fell into oblivion until in 1982 a new edition was published new version due to the success of the film adaptation carried out by Wes Craven. In the number 20 of this collection appears as screenwriter Alan Moore, who manages to raise the tone of the story until it becomes one of the most important moments in the history of the comic. In addition, Moore creates a new character, John Constantine, who will later enter on his own merits in the history of the comic with two series of his own. Published in Spain by ECC in three volumes in a beautiful deluxe edition (here you have the link to Volume 1, and Volume 2; Volume 3 at the time of writing this article is not yet for sale), is one of those jewels that a good collector should not let run.

Every fifteen years or so, DC Comics relaunches the first superhero in history: Superman. In this way the vision of the character is renewed, new followers are created, the story is oxygenated and a new approach is given, according to the times. In 1998, Grant Morrison presented DC, along with other screenwriters, including Mark Millar and Mark Waid, a new approach to the character that was eventually discarded by the publisher. After spending many years parked in a drawer, Morrison returned to this project whose main attraction is the fact of not giving up the contributions made by previous creative teams, honoring the work done for more than 70 years with the character. The result was 12 staples that appeared between November 2005 and October 2008 that represent one of the milestones in the history of American comics. All-Star Superman is a real wonder that can be acquired in a single volume that is already in its fourth edition in Spanish.

8. Batman. The Killer Joke, by Alan Moore and Brian Bollard

Alan Moore’s second appearance on this list, is that the bearded screenwriter gave a lesson on how to make a story with this cruel graphic novel with Batman, and his nemesis, the Joker, as protagonists.

It was published in March 1988 and became an immediate classic. In the 30 years that have elapsed, his fame has only increased. And is that Batman: The murderous joke will not leave anyone indifferent. His script borders on perfection, with one of the best endings in the history of ninth art, the drawing is wonderful, starting with a truly mythical cover that has been imitated to satiety and, in general, is the demonstration that to develop a story effective and forceful do not need hundreds of pages or tens of numbers from a collection.

7. The Caste of the Metabarones, by Alejandro Jodorowsky and Juan Giménez Jodorowsky’s

Surprising appearance on this list, since we all expected him to appear with his Incal saga, drawn by Jean Giraud (Moebius) , but instead the saga emerged as the Incal spinoff appears, as it tells the story of one of the secondary characters of that plot plot and that of their ancestors, the Metabarones.

The caste of the Metabarones is a series of comics that began in a first stage (the one we are dealing with here) the Chilean-French scriptwriter Alejandro Jodorowsky and the Argentine cartoonist Juan Giménez . Later I would have continuation (in fact it is a prequel) with Jodorowsky himself as a screenwriter and with Spaniard Das Pastoras as illustrator. The whole story arc explains the life and work of the five Metabarones, a dynasty of perfect warriors.

6. V for Vendetta, by Alan Moore and David Lloyd Third

Appearance (and will not be the last) of Alan Moore as a screenwriter on this list, this time accompanied by illustrator David Lloyd . Although there are many people who have approached the comic thanks to the film, when they open the pages of the comic they realize that it is a story much darker, less friendly and more pessimistic than the film.

The success of the comic has a bittersweet background. While the first issues of V for Vendetta were being published, the publisher that published the first issues of the series went bankrupt and Moore and Lloyd had to sell the rights to the work to DC so that it would end up publishing all the staples. Now, Moore and Lloyd charge a small part of what would have been due to them due to the enormous success of the story and, above all, the merchandising generated by the film.

Daredevil was a dead character, a dying collection in the Marvel when a young Frank Miller arrived to take charge of the script and, later, also of the drawing, in a glorious stage of the character. Literally, Miller gave Daredevil new life. Once the character was resurrected , Miller took care of other projects, but he had the feeling that he still had a story to tell about the blind superhero. Four years later of his first stage with Daredevil , Miller returns to sign this magnificent series of episodes, ranging from number 227 to 233 of the USA comic-book, and with it an authentic masterpiece. Daredevil: Born Again is one of the undisputed wonders of ninth art, a work that is mandatory to have in the collection of any comic book fan. Really. Required.

4. Maus: Story of a Survivor, by Art Spiegelman

Little can be added of everything that has already been written about this moving work on the Jewish Holocaust explained from the point of view of a survivor, the father of the author himself. In 1992 it became the first graphic novel to win a Pulitzer Prize , a fact that already explains by itself the phenomenon in which it became the moment of its complete publication. Maus: A survivor’s story initially appeared in two volumes. He was surprised because in such a tremendously human work, the protagonists are mice, which represent the Jews, and cats, which represent the Nazis.

3. Batman: The Return of the Dark Knight, by Frank Miller

Between February and June 1986 DC Comics published the four numbers of a four-series miniseries with Batman as the protagonist. It was Batman: The Return of the Dark Knight , written and illustrated by Frank Miller. This comic changed the genre and revolutionized the medium. So clear. As simple as that.

Batman , already old, returns to wear the uniform, get into the cloak of the bat man and fight crime. From the first vignette, it is a comic that assumes a new vision of the figure of the superhero, more mature, with a more complex psychological armor. The heroes and villains are no longer schematic characters, but acquire a complexity and background that they had not acquired so far, except in the comic that is in 1st position on this list (which was published in September of that same 1986, by the way) or in the aforementioned Batman: The killer joke .

With this miniseries, Frank Miller achieved the status of a comic book star. Then other works would arrive, such as Ronin , 300 or Sin City , but none of them reached the level of excellence of this Batman: The return of the Dark Knight .

If we have to highlight a comic from the 90s, without a doubt, we would have to talk about Sandman , written by Neil Gaiman and illustrated by a huge list of artists who completed a total of 75 numbers, which has now been limited to a total of five volumes in the recent Deluxe edition plus a sixth dedicated to Death , Sandman’s sister. The series begins with horror comics, but soon drifts into the fantastic genre and adds elements of mythology. The Sandman universe is baroque, terrifying, philosophical and, above all, artistic. Each story is a work of art and it is worth having it in the best possible format. The recent edition of ECC is the one we link below.

Alan Moore reappears on the list and does so in the (almost) undisputed number one on the list of the best comics in history. Watchmen was originally a miniseries published in twelve staples, between September 1986 and October 1987. In it, Alan Moore (yes, again he, and already four) develops a story about superheroes away from all glamor. The story is full of social criticism, a faithful reflection of the situation at which it seemed that the US and the USSR could start a nuclear war at any time.

Dave Gibbons develops the entire collection with the same structure: pages with 9 bullets of the same size, arranged in a 3 × 3 grid with an excellent drawing. Alan Moore, on the other hand, declared that Watchmen wrote with the intention of writing something as pretentious as “ a kind of Moby Dick of superheroes; something that had that kind of weight, that kind of intensity. And he got it.

Watchmen is the top of the modern comic. And probably the one in the whole comic story. And precisely because of that, we completely discourage your reading if you don’t have a certain comic culture before.