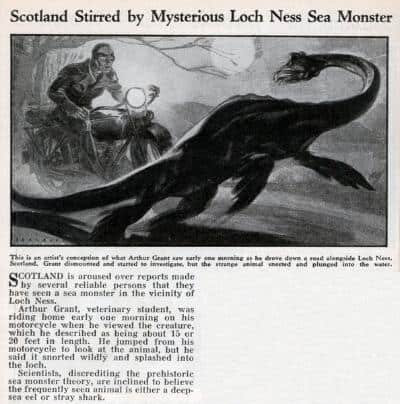 Though the legend of the Loch Ness Monster dates back to the middle ages the
creature was really not known outside of Scotland until 1933 when a report of a
sighting made international headlines.

On May 2, 1933 the Inverness Courier ran a story about George Spicer and his
wife who had been taking a leisurely drive around the Loch when the spotted
something strange on the water. According to Spicer (it was) “the nearest
approach to a dragon or pre-historic animal that I have ever seen in my life.” The
IC story was the first time that Nessie had been called a “monster” hence the title
“Loch Ness Monster” was born.

The wire services quickly picked up on the story and soon the Loch Ness
Monster was making headlines around the globe. The popularity of the piece
prompted others who had reportedly seen the creature to come forward and
before long the Inverness Courier was overwhelmed with stories and alleged
sightings. Within a year the first photo of Nessie taken by Hugh Gray (on
December 6th 1933) and the famous Surgeon’s Photograph (taken the following
April), which has been now proven fake, were published spawning even more
interest in the legendary beast. 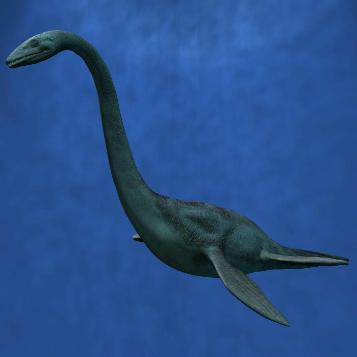 The earliest report of a monster associated with the
vicinity of Loch Ness appears in the Life of St.
Columba by Adomnán, written in the 7th century.
According to Adomnán, writing about a century
after the events he described, the Irish monk Saint
Columba was staying in the land of the Picts with
his companions when he came across the locals
burying a man by the River Ness. They explained
that the man had been swimming the river when he
was attacked by a “water beast” that had mauled
him and dragged him under. They tried to rescue
him in a boat, but were able only to drag up his
corpse. Hearing this, Columba stunned the Picts by
sending his follower Luigne moccu Min to swim
across the river. The beast came after him, but
Columba made the sign of the Cross and
commanded: “Go no further. Do not touch the man.
Go back at once.” The beast immediately halted as
if it had been “pulled back with ropes” and fled in
terror, and both Columba’s men and the pagan
Picts praised God for the miracle.

The oldest manuscript relating to this story was put
online in 2012. Believers in the Loch Ness Monster
often point to this story, which takes place on the
River Ness rather than the loch itself, as evidence
for the creature’s existence as early as the 6th
century. However, sceptics question the narrative’s
reliability, noting that water-beast stories were
extremely common in medieval saints’ Lives; as
such, Adomnán’s tale is likely to be a recycling of a
common motif attached to a local landmark.
According to the sceptics, Adomnán’s story may be
independent of the modern Loch Ness Monster
legend entirely, only becoming attached to it in
retrospect by believers seeking to bolster their
claims.