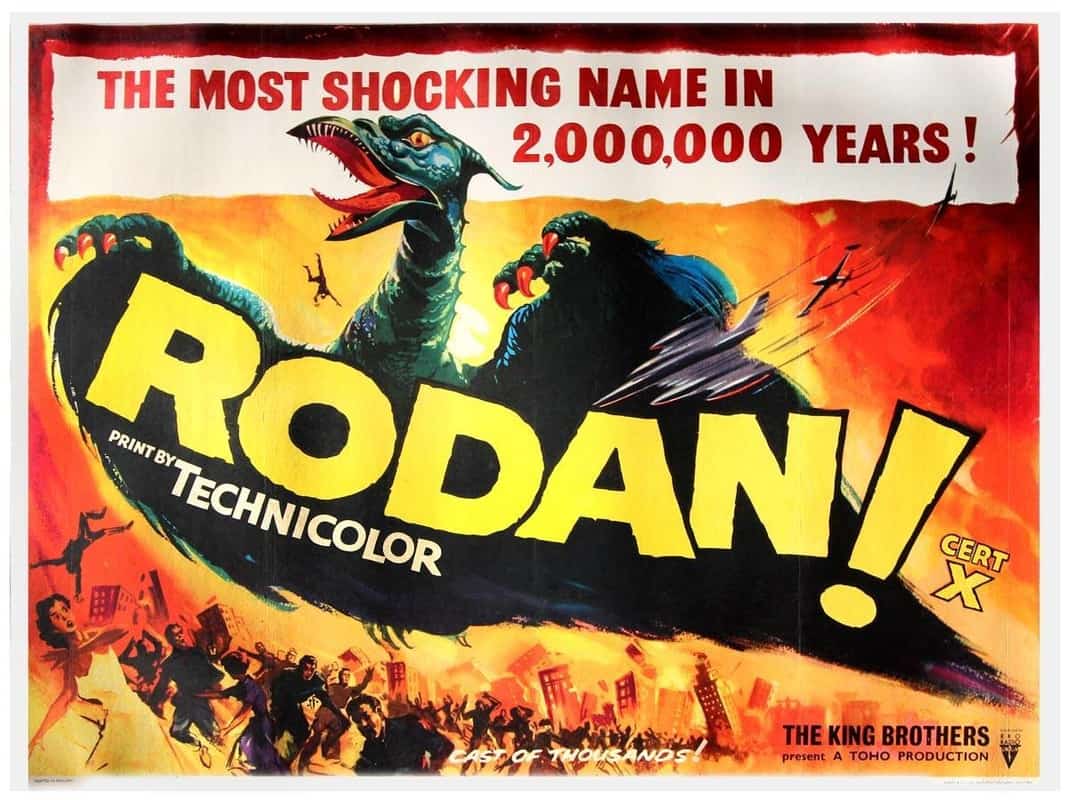 After the success of the first two Godzilla films, Ishiro Honda and Tomoyuki Tanaka would take on the ambitious task of creating a flying monster epic. The film, which would be later titled, “Sora no daikaiju Radon”, was initially penned by writer Ken Kuronuma who drew inspiration from a story he had translated for the Japanese version of Amazing Stories magazine about a Kentucky Air National Guard pilot, who had crashed his plane while chasing a UFO. Kuronuma’s original story would be reworked by Takeshi Kimura and Takeo Murata who replaced the UFO with a pair of flying dinosaurs and added the smaller insect-like Maganuron, who were modeled after the giant ants from Warner Bros. hit 1954 film “Them!”.

The flying monster, Rodan, presented several technical problems for Eiji Tsuburaya and his special effects team. Elaborate rigging had to be created to support the 150 pound Rodan suite, and the actor inside it. The use of special cameras created excessive heat and prevented the crew from shooting studio scenes during the hot summer days. Tsuburaya’s team would end up dividing its time between twelve hour nights inside and long days outside shooting on miniature sets on Toho’s back lot.

Working inside the heavy and cumbersome Rodan costume was extremely difficult, and dangerous, for actor Haruo Nakajima. While filming a scene where, Rodan was to bust from the water, the support wires broke and Nakajima plummeted twenty feet. Luckily the water and the mass of the costumes wings cushioned the blow and the actor was only shaken and not seriously injured.

While filming the film’s climatic death scene, the wire broke on one of the miniature Rodan puppets. The puppeteer tried to desperately control the miniature to prevent it from falling into the simulated lava flow. Tsuburaya kept cameras rolling as the Puppeteer wrestled with the tiny Rodan prop. In the end, he kept the sequence, feeling the sudden upward movement looked as if the monster was making one last effort to save itself before being consumed by molten rock.

The film was released in Japan in 1956 and earned special effects genius, Tsuburaya, yet another Japan Film Technique Award. Surprisingly, however, was the response the film received when it was released in the United States in 1959. A rather large marketing campaign, lead to surprisingly large ticket sales. The film managed to gross a whopping $500,000, which by today’s standards doesn’t seem like much, but for its time, Rodan would reign as the highest grossing science fiction film in history. This success would be an eye opener for the American film industry. From that point forward, film distribution companies would compete vigorously to get Japanese monster films for US release.

” Rodan is a supersonic movie for the jet age!”

A mine cave-in would open a doorway to the prehistoric past. A search for trapped miners brought death to anyone who attempted it. Giant insects began to roam the caverns making rescue impossible. It would have been okay if the creatures would have stayed in the mine but, they began to raid the village as well.

Mysteriously about the same time two UFOs flying at high mach speeds began to be sighted over the Pacific. The Air Force with their jets could not catch these UFOs. This would be only the beginning of the strange events that were about to unfold.
One of the lost minors would be found wandering the hillsides…alive. It would take several days before he would come to and tell his amazing story. He was convinced that he had witnessed the hatching of a giant flying reptile. It would not be too long before the man’s story would be proven factual. The Air Force would engage the two UFOs and find them not to be alien spacecraft but, two enormous flying reptiles. Jets were no match for their speed and gigantic size. The two monsters would take out their rage on several cities in Japan. Their wingspan could create hurricane force winds that could blow a city out of existence. Was Japan doomed?

The military needed to act fast. It was determined, through recon, that the two Rodan had made a volcano near the mine their nest. It was determined that all the fire power the military could muster would be brought to bear on that location. The onslaught was awesome. The force of the blasts would bring the volcano to life. The twin Rodan were unable to escape the intense heat and rivers of molten lava. Oddly this scene would end in sadness, for the one Rodan would choose to kill itself after the other had perished. 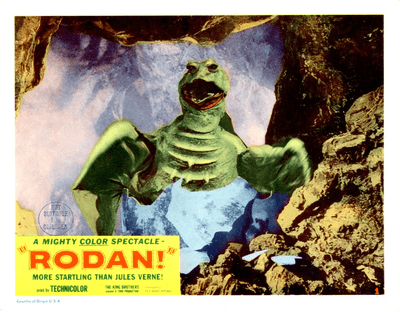