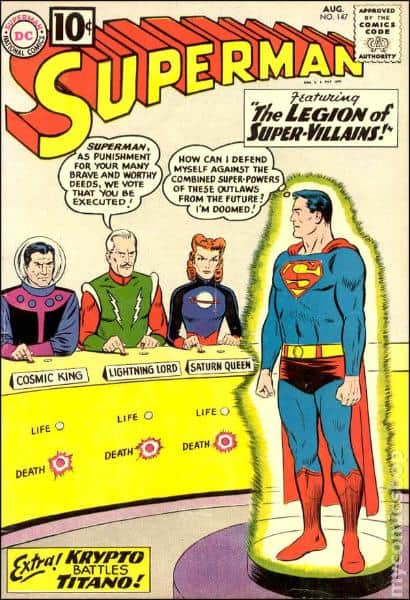 7th appearance of of the Legion of Super-Heroes and 1st
appearances of the Legion of Super-Villains and the Adult
Legion. Cover pencils by Curt Swan, inks by Sheldon Moldoff.
The Great Mento!, art by Al Plastino; Perry White fakes ESP
powers as The Great Mento (with Superman’s help) to capture
wanted criminals. Krypto Battles Titano!, art by Al Plastino;
Krypto travels into the prehistoric past to meet Titano. The
Legion of Super-Villains!, script by Jerry Siegel, pencils by Curt
Swan, inks by Sheldon Moldoff; Luthor contacts and teams up
with Legion of Super-Villains from 30th Century; adult Legion of
Super-Heroes comes to 20th Century to help Superman. 36
pgs. Cover price $0.10.Superman Vol 1 #147
August, 1961
Executive Editor – Mort Weisinger

Synopsis for “The Great Mento”

Before going to a annual photographers masquerade ball, Jimmy Olsen is ordered by Perry White to put the phone-a-scoop tip money
into the Daily Planet’s wall safe. The guest of honor at the ball is Superman, and as the party progresses, the microphone is taken by a
masked man named Mento who claims to have ESP powers that allows him to read others minds. Proving his ability by reading Jimmy
Olsen’s thoughts, Mento further goes to write down what is apparently Superman’s true identity down on a chalk board and shows it
only to the Man of Steel. Mento warns Superman that if he interferes with his crimes that he will reveal the Man of Steel’s secret
identity.The next day there are a series of spectacular robberies carried out by Mento and his gang. When they attempt to steal a large
diamond being put on display by a visiting maharajah, Superman poses as a decoy to try and move the jewel to another location.
However, Mento sees through the disguise and orders his men to shoot away Superman’s disguise. With his cover blown, Superman is
forced to hand the diamond over or risk having his secret identity revealed.

With news over Mento’s “immunity” to Superman, he calls in a number of big name mobsters including Rocky Sneed to his private
boat to plan a major crime spree in Metropolis free of interference from Superman due to Mento’s knowledge of his secret identity.
The boat is suddenly lifted out of the water by Superman. When the crooks are all captured by Superman, they all demand that they
release them or Mento will reveal his identity. When the crooks are all locked up in jail, Mento does reveal a secret identity: his own.

As it turns out, Mento is none other than Perry White, who had devised the identity with Superman in order to trick a number of
wanted criminals into coming to Metropolis so that they can be captured. With the crooks in jail, Superman and Perry return to the
Daily Planet to tell Lois and Jimmy of their success.

While putting on a show for charity, Superman is shocked to see a giant creature fly into the area. However, knocking it aside
Superman reveals it really to be his faithful dog, Krypto playing a trick on him.Afterward, Superman answers questions at a press conference where he talks about some his greatest foes. He recalls his recent battle
against Titano, the ape that was mutated into a giant gorilla that fired beams of Kryptonite from it’s eyes. Finding the story boring,
Krypto goes off to find one of the bones he buried only to find that it was crushed by Titano before Superman sent the ape into the
prehistoric past.

Wanting to get back at Titano, Krypto travels into the past to get even. There the Dog of Steel watches Titano battle off a pack of
Tyrannosaurus Rex. After the fight, Krypto decides to have fun at Titano’s expense by tricking the gigantic ape into attacking it’s own
reflection and attacks Titano directly. Krypto learns the folly of his plan when he becomes victim to the gigantic ape’s Kryptonite
vision. Krypto is spared however when the simple minded simian is distracted by a swooping pterodactyl.

Krypto realizes that perhaps it would be better to make peace and befriend Titano instead and wins the simple brutes friendship by
bringing him bananas. Their tranquil time together is short lived when aliens invade the Earth and attack the two super-animals. Krypto
and Titano manage to destroy both of the probe ships, but Krypto overhears the mothership commanders talk about testing Earth’s air
to see if it’s worth invading. Krypto then sacrifices his newly found friendship with Titano by attacking the beast and goading it to
bombard the alien ship with it’s Kryptonite rays, causing the aliens oxygen test to read a negative result, prompting them to abandon
their invasion endeavors.

With pre-historic Earth protected from invasion, Krypto is forced to return to his own time or risk being killed by Titano’s Kryptonite
ray. Returning to the present, Krypto still muses that he somehow finds the creature lovable.

Synopsis for “The Legion of Super-Villains!”

Cosmic King, who can transmute matter with his eye beams; Lightning Lord, brother of the Legion’s Lightning Lad who also was
bombarded with the lightning powers of an alien beast; and finally Saturn Queen hailing from Saturn just like the Legion’s Saturn Girl
and has the powers of telepathy, who one day turned evil after years of being an non-criminal on Saturn.

The group team up with Luthor to get revenge on Superman, who at that time was helping build Orphan City, for a bunch of orphans
to live in. After the Legion of Super-Villains terrorized the celebrations, they lure Superman into a trap on a planet in the future where
he is captured and sentenced to death.

However, before Luthor and the Legion of Super-Villains can pull the lever, the now adult Legion of Super-Heroes arrive and battle
their evil counterparts. When the fight comes to a draw, the Legion offers one of their own to die in Superman’s place, Saturn Woman
volunteering to take his place. As a last wish she asks that Superman create a ring around the planet they are on just like her home
world of Saturn. With a ring around the planet, Saturn Queen suddenly becomes good and uses her mental powers to subdue her
fellow evil Legionaries and Luthor. Superman reveals to the others that when Saturn Queen revealed why she became evil, Superman
deduced that it was possibly due to the fact that she was away from Saturn’s rings which has a special property that made Saturians
incapable of criminal or evil activity. With the criminals defeated, the good Legion takes their evil counterparts into custody while
Superman returns to the present to bring Lex back to the authorities to finish his prison term.