Since it’s St. Patrick’s Day, I decided it would be fun to review on of the meanest, and greenest, science fiction films of all-time. I am, of course, speaking of the joint Japanese and American production, “The Green Slime”, a film that will forever stand as a testament of what these two proud countries can achieve together. WWII and this movie….that’s about it. Pretty sad when you think about it.

If you think way back to the late 1960s, it would make perfect sense that MGM would want to team up with the Toei company to produce a sci fi film. The Godzilla films were doing good business at the American box office and the Japanese had earned a reputation for producing excellent special effects on a shoe-string budget.

Indeed the production team for “The Green Slime” was a very mixed bag of characters from both sides of the Pacific. The film’s director, Kinji Fukasaku, had never produced a science fiction film before and had gained a reputation in Japan for creating gangster films such as “The Yakuza Papers” series.

The film’s script was penned by a team of American B movie writers including Charles Sinclair, who wrote the script for the movie based on the “Batman” TV series, Bill Finger, and Tom Rowe. However, Ivan Reiner was ultimately given credit for the work. The most notable name of this bunch is Finger, although his claim to fame didn’t come from his screenplays. The writer has often been credited as the co-creator of the superhero, “Batman”, along with Bob Kane, a fact that has sometimes fallen under dispute.

American B movie actors were brought over to Japan to play the lead characters in the film. The most notable of these were Robert Horton (Commander Jack Rankin) and Richard Jaeckel (Commander Vince Elliott). However, it was the films leading lady, Italian actress, Luciana Paluzzi, who was cast as Dr. Lisa Benson, that would have been best recognized by American audiences. The actress had starred as the assassin Fiona Volpe, in the James Bond film, “Thunderball” just three years prior.

The rest of the cast was filled by amateur actors from America, Turkey and Germany. The background actors were actual US Air Force personnel from Yokota Air Base, who had been recruited because they already had the ‘military’ look needed for scenes that were supposed to take place on an orbiting space station.

The hardest obstacle for the film makers was the language barrier. Translators for several different languages had to be brought in to interpret the directors instructions, leading to several instances of confusion on the set.

The films special effects were completed by Japan Special Effects Co. and Ekisu Productions under the direction of Akira Watanabe and his crew of ex-Toho employees. Their experience working with the famed Japanese special effects master, Eiji Tsuburaya, would come in handy in both designing the monster costumes and miniature sets used in the film.

A group of astronauts set out to stop a giant asteroid on a collision course with the planet Earth. They land on the asteroid, plant explosive charges and destroy it. Afterwards they return to the staging area, a space station called Gamma 3 in orbit around the Earth. Unfortunately, a scientist from the mission has unwittingly carried a luminous-green substance on the leg of his spacesuit which quickly mutates into one-eyed, tentacled monsters with the ability to discharge lethal bolts of electricity. The Gamma 3 crew fend off the alien creatures with their laser-based weaponry, only to discover the creatures feed off the energy which, in turn, allows them to multiply rapidly, sprouting the new creatures from their blood. As the creatures overrun the station the crew continues to fight back against overwhelming odds. 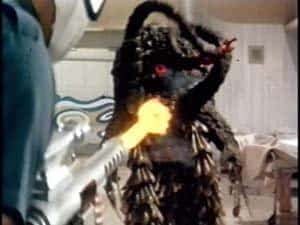 “The Green Slime” was released in December of 1968 in Japan as “Gamma 3: Operation Outer Space” and marketed towards children. Initially the film was shown as part of Toei’s seasonal kiddie matinée series, known as” Toei Chibiko Matsuri” (Toei Children’s Festival) which also featured cartoons and shorts aimed at younger viewers. For this release Toei cut 13 minutes out of the feature, including the Horton-Paluzzi–Jaeckel love triangle subplot, which the studio deemed too adult and boring for children.

As expected “The Green Slime” opened in America in May of 1969 to a plethora of negative reviews. Most of these were very similar, in nature, to the reviews that Toho’s Godzilla films had been receiving for over a decade. These less than stellar reviews, combined with the preconceived idea that the film was just another Japanese B monster movie, led to poor box office results.

The film, like most of the Japanese monster films that had proceeded it, did become a matinee hit with American youngsters. Children always seemed to love the elements in these films that were generally lost on an adult audience.

I, myself, was first introduced to this film as young man as an afternoon movie feature. The Japanese sci fi elements were obvious and appealing to me, due mostly to my love of all the Godzilla and Gamera films. True, the acting wasn’t great, and the monsters were a bit hokey, but that’s what you expect from a film like this. It isn’t supposed to be taken seriously, its just supposed to be good clean fun, and it is.