The Land That Time Forgot

In the early 1970s’ Amicus Pictures (Owned by Milton Subotsky and Max J Rosenberg) decided to pump so life into the declining British fantasy film industry by bringing the works of Tarzan creator Edgar Rice Burroughs to the big screen. The company’s rival, Hammer, had abandoned its standard horror films for features starring half naked women in an attempt to put more bodies in the seats and the time seemed right for Burroughs strait forward action tales to fill the void.

The first of the four Burrough’s stories to be produced by Amicus would be an adaptation of the short story “The Land That Time Forgot” which was first published in Blue Book Magazine in 1918. Milton Subotsky had first penned a screenplay for the film back in the early 1960s’ but this first draft was initially rejected by the late Burrough’s estate. It was under their prodding that the script was rewritten by Jim Cawthorn and Michael Moorcock. Their dialogue heavy, light on the action script however didn’t meet Subotsky’s approval so it was reworked yet again.

The film began production at Pinewood Studios in April 1974 with a mere $750,000 budget that had been put up by American International Pictures in exchange for the American distribution rights. This extremely low budget forced the film-makers to settle for cost cutting measures in the effects department. Hand puppets were used for the films dinosaurs in many scenes where costly stop motion animation had intended to be used. The effect looks primitive when compared to modern CGI effects, but for the time period in which it was created the effects in The Land That Time Forgot faired well against most rival productions.

Script problems and hand held dinos were not the only problems the production would face in its early stages. Originally Stuart Whitman was cast as the American engineer Bowen Tyler but Samuel Arkoff of AIP protested. Their next choice, Doug McClure, finally agreed to take the role after initially passing on it. McClure was billed as the perfect leading man by Kevin Connor. A reputation he had earned as the lead on the TV Western “The Virginian.” On the set however McClure earned another type of reputation after his tendency to hit the bottle caused him to miss a couple of days shooting and punch a hole in producer Johnny Dark’s office door. Despite this McClure was considered a nice guy by his costars. He even held the hand of a nervous Susan Penhaligon (cast as biologist Lisa Clayton) during the explosions of the films volcano erupting climax. John McEnry, who played the German U-boat Captain von Schoverts, was continually acting up on the set due to his belief that the production was beneath him as an actor. This lead to his voice being dubbed over by Anton Diffrin due to his demeanor and lackluster tone. Aside from this however none of the other off screen troubles manifested themselves in the finished product.

The films plot is a strait forward Burroughs adventure story. The survivors of a torpedoed allied cargo ship turn the tables on their attackers and seize control of their U-boat. The Germans manage to damage the ships compass and instead of steaming to a neutral port the group finds itself of the coast of the legendary island Caprona where time has stood still since prehistoric times. Forced to venture ashore in search of food, supplies and fuel the crew encounters a bevy of dinosaurs that intend on making sure no one escapes alive. As in all good adventure stories of this type just about everything and everyone the group encounters is set on doing them mortal harm and danger lies behind every turn. The groups focus is a simple a straight forward one. Keep from being eaten and figure out a way to get off the island before it consumed in a river of molten rock. Seems all good dinosaur flicks have to end in some kind of volcanic catastrophe and this film is no exception even though Moorcock had originally written it with a different ending. 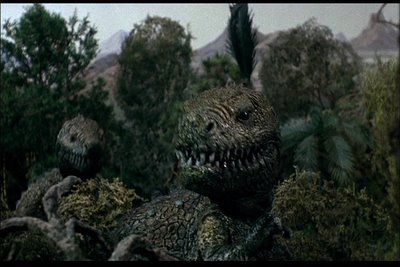 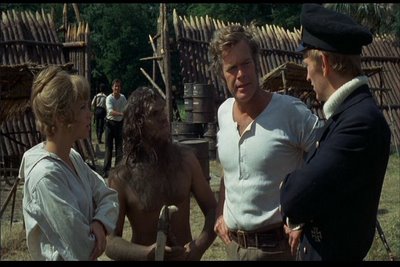 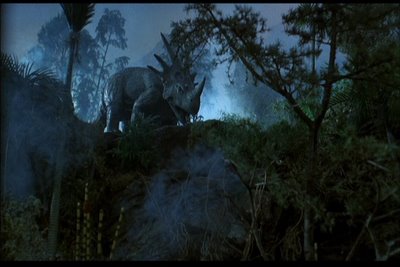 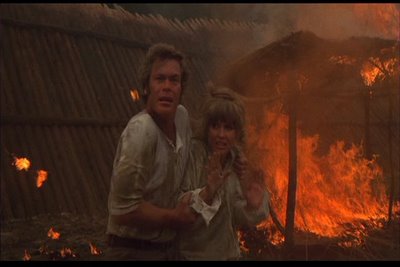