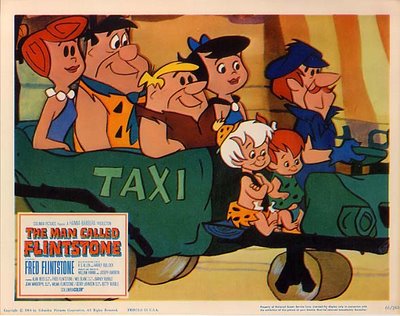 Immediately after The Flintstones ended its seven-year run (1960-1966) as the first animated show on American prime-time television, work began on “The Man Called Flintstone” the first and only big screen appearance of “The Modern Stone Age Family.” Alan Reed (Fred), Mel Blanc (Barney), Jean vanDer Pyl (Wilma) and Gerry Johnson (Betty) were all brought back to reprise their TV roles for the motion picture, which was written, by Ray Allen and Harvey Bullock. The film was aimed at capitalizing on the success of the original show and to be a spoof of the popular James Bond films. The film was part musical, part Flintstone and a good chunk 007. The film was released in August of 1966 and was minor success at the box office. The film did however have a second life as a matinee feature following its initial release. 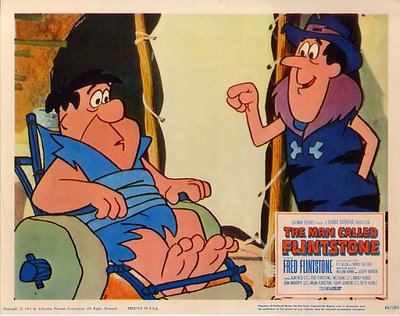 In the film Fred Flintstone is persuaded to take over for an injured secret agent Rock Slag, to whom he is an exact double, by the Stone Age Secret Service. Under the guise of a family vacation to Paris, Fred’s mission is to infiltrate the secret organization known as SMIRK whose leader, the Green Goose (voiced by Harvey Korman) is bent on destroying the world with a doomsday missile. Flinstone trails the Green Goose to Rome where he and Barney get captured. The real Rock Slag shows up in the nick of time to rescue the duo and together they save the day by foiling the evil plot. 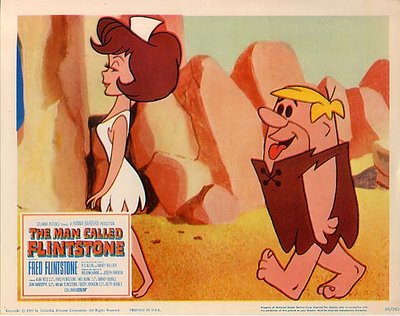 The Flinstones have become a timeless classic in the history of television, while the motion picture “The Man Called Flintstone” has disappeared into relative obscurity. Many fans of the original show are not even aware of its existence.

THE MAN CALLED FLINTSTONE – Do You Know?

The Man Called Flintstone is a 1966 American animated musical comedy film produced by Hanna-Barbera Productions and released by Columbia Pictures. It was the second Hanna-Barbera feature, after Hey There, It’s Yogi Bear! (1964). The film is a theatrical spin-off of the 1960-66 television series, The Flintstones, and is a swan song of the TV show, made immediately following the end of production on the series. The working title of the film was That Man Flintstone, with the film poster featuring Fred in the same pose of the Bob Peak poster for Our Man Flint. The film is a parody of the James Bond films.

This film was the first feature film voice role for Betty Rubble’s voice actress Gerry Johnson. Additionally, it marked the first voice work of Henry Corden, who supplied Fred’s singing voice, and would go on to fully assume the role of Fred after Alan Reed’s death in 1977.

While the film includes numerous musical interludes, including one song performed by Louis Prima, the popular theme song from the show itself is not used. However, plots from several episodes of the TV series are used, including an episode in which Fred becomes involved in a spy caper spoofing Goldfinger, and another in which he encounters JL Gotrocks, the world’s richest man, and his exact double.

During the “Teammates” musical number, when Fred and Barney’s airplane falls apart, it becomes the “Flintstone Flyer”, the pedal-powered contraption featured in the very first episode of the series.

Unusually, Wilma is seen wearing a blue dress in this film rather than her usual white.

The airplane The Flintstones take to get to Paris has “Qantas” – the name of a real-life airline – written on the side.

After Fred’s tie got ruined by Barney while trying to escape the Green Goose’s tower, the tie reappears moments later after Fred and Barney got out from the door of the tower.

Rock Slag disappears in back of the desk at the pizza place (after he got knocked out by Barney), when The Chief makes a Phone call and Fred leaves with Tayna.

Variety gave The Man Called Flintstone a positive review on August 10, 1966, calling the production “excellent” and noting that the “stone-age scenery and machinery are mildly amusing and sometimes highly inventive”. The review judges that the plot is a fast-moving and clever spoof of contemporary spy films.

The Flintstones Say “Smoke Em If Ya Got Em Kids”

It is hard to fathom that a cigarette company would use cartoon characters to sell it’s product to children, but that is exactly what Winston Cigarettes did back in the early 1960’s.

During the original run of The Flinstones the show was sponsored by several different companies, one of them Winston Cigarettes. To showcase the sponsor’s products Hanna-Barbera (the animation company that produced The Flintstones) produced several add spots featuring their beloved characters using the products ….. even smoking cigarettes.

Today such a advertising campaign would be strictly taboo …. but back in 1961 nobody thought twice about it and the adds aired on prime-time television for the whole family, including youngsters, to see. It is pretty damn obvious that these adds, though made for adults (The Flintstones, though animated, was considered adult viewing), were really designed to get kids to take up smoking.

Screw you Joe Camel …. we got Fred and Barney!

I actually think that there was an add with The Great Gazoo reading a Playboy and drinking Coors beer ….. but I may be mistaken.

All jokes aside these adds did air at the end of every episode of The Flintstones back in the day.