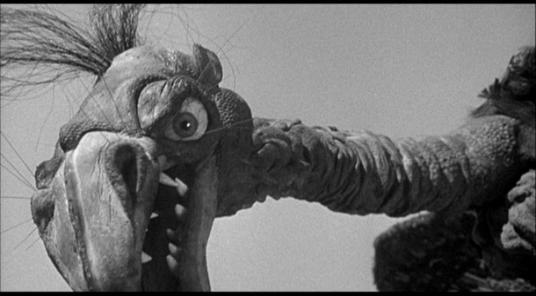 The Giant Claw is a 1957 sci-fi film about a giant bird (“It’s as
big as a battleship!”) that terrorizes the world. Produced by
Clover Productions under the working title ‘Mark of the Claw’
and released through Columbia Pictures, it starred Jeff Morrow
and Mara Corday, and was directed by Fred F. Sears. The film
has been a staple of the bootleg video market with only two
official VHS releases (one in the USA through Goodtimes
Home Video and the other through Screamtime in the United
Kingdom) to date, Columbia Pictures finally released the film
officially to DVD in October of 2007 as part of the two disc four
film set Icons of Horror Collection.

The poster artists were purportedly not shown the puppet nor
any other artwork from the film’s production and concluded that
the monster was a giant eagle or hawk. Thus, the creature in the
posters looks nothing like the beast in the film.

The producers originally planned to use a stop-motion model
created by Ray Harryhausen for the bird. However, due to
budgetary limitations they were forced to use a marionette.

In an interview, star Jeff Morrow said that neither he nor anyone on
the film saw the title “monster” until they went to the film’s premiere
in Morrow’s home town. It turned out that producer Sam Katzman
had contracted with a low-budget model-maker in Mexico City to
construct the “Giant Claw” and no one in the cast or crew had any
idea it would come out looking as bizarre and, frankly, laughable as
it did. Morrow said that the audience roared with laughter every
time the “monster” made an appearance, and he wound up
slinking in embarrassment out of the theater before the film was
over so that no one who knew him would recognize him.