Charlie Brown is excited to be invited to his
first ever party, Violet’s Halloween party.
Before the party, the Peanuts gang plan to
go trick or treating, with Snoopy, who is
dressed as the WWI flying ace, taking his
Halloween persona to an extreme. The one
person who won’t be joining them for the
trick or treating or the party is Linus, who
will be waiting in his local pumpkin patch
for the arrival of the Great Pumpkin. Linus
believes that the Great Pumpkin rises out
of the most sincere pumpkin patch – none
more sincere than his own local one – flies
into the air, and delivers presents to all the
boys and girls around the world. Because
of his belief, Linus is the laughing stock
among his friends. Sally is torn between
going trick or treating for the first time and
attending Violet’s sure fire fun Halloween
party, or following her love Linus and
waiting for the Great Pumpkin’s arrival with
him.

The story opens with Linus and Lucy going out into a nearby pumpkin patch to find a pumpkin. After rejecting a couple of smaller choices by Linus, Lucy points to the biggest pumpkin in the bunch, which Linus clumsily rolls back home. When they get home, Lucy takes a big knife and slices into the pumpkin to gut it, at which point a mortified Linus says “Ohhhh, you didn’t tell me you were going to kill it!”, and starts wailing.

With autumn already in full swing, Charlie Brown is busy raking leaves with Snoopy’s help. Linus sees the pile and jumps right in the middle of it, forgetting he had a wet sucker in his possession. Moments later Lucy comes with a football for Charlie Brown to kick, but he initially refuses. Lucy shows him a letter, but for the first time she pulls it away when Charlie Brown is about to kick the ball, which sends him landing flat on his back, like always.

Later, Linus writes a letter to The Great Pumpkin, to Charlie Brown’s disbelief, Snoopy’s laughter, Patty’s assurance that the Great Pumpkin is a fake, and even to Lucy’s violent threat to make Linus stop (“You better cut it out right now or I’ll pound you!”). Linus laments in the letter that “more people believe in Santa Claus than in [The Great Pumpkin], but let’s face it; Santa Claus has had more publicity. But being number two, perhaps you try harder” (a tongue-in-cheek jab at Avis Rent-A-Car’s popular slogan of the day).

After Linus mails his letter to the Great Pumpkin (using his blanket to open the mailbox after Lucy refuses to help), Charlie Brown dances when he receives an invitation to go to Violet’s Halloween party. His bubble is quickly burst by Lucy who mentions there were two lists, people to invite and people not to invite; Lucy is certain Charlie Brown’s name was on wrong list.

On Halloween night, the gang gets their costumes ready. Lucy dresses as a witch, while the other kids dress up as ghosts. Pig-Pen is easily recognized by his trademark cloud of dust, while Charlie Brown has eyeholes cut out all over his sheet, matter-of-factly stating he had a little trouble with the scissors. 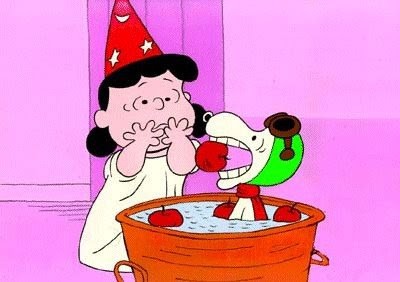 Before going trick-or-treating, the gang stops off at the pumpkin patch to make fun of Linus’s missing out on all the fun as last year (especially when he asks if they came to sing “pumpkin carols”). But Linus is convinced that the Great Pumpkin will indeed come because he thinks the patch he’s in is sincere enough and even convinces Sally to stick around to wait with him. The rest of the gang go off leaving Sally and Linus behind.

During trick-or-treating, everyone else gets assorted candy, gum, apples, cookies, popcorn balls, and even money. But at every house, Charlie Brown gets the same thing — a rock. After tricks-or-treats, and another quick stop at the pumpkin patch to rib Linus and Sally again, the gang all go off to Violet’s Halloween party.

Meanwhile, Charlie Brown’s dog Snoopy, wearing his World War I flying ace gear, climbs aboard his Sopwith Camel (in reality, his doghouse) to do battle with the Red Baron. After being shot down, Snoopy makes his way across the countryside, before briefly crashing the Halloween party. He then makes his way to the pumpkin patch where Linus and Sally are still waiting for the Great Pumpkin to show up. Linus hears Snoopy’s rustling, and believes it’s really the Great Pumpkin, and when Snoopy (still hidden in the shadows) rises above the pumpkins, Linus promptly faints. When Sally sees it’s only Snoopy, she becomes outraged over missing tricks-or-treats AND the Halloween Party, and threatens to “sue” Linus. She storms out of the pumpkin patch with the other kids, leaving Linus by himself, still convinced the Great Pumpkin will come.

When 4:00 a.m. rolls around on November 1st, Lucy gets up to check on Linus. Seeing his bed empty, she goes out to the pumpkin patch to find him lying on the ground shivering, covered in his security blanket. Lucy grudgingly walks him home and to his room, removing his shoes and he passes out in his own bed as she puts the covers on him before angrily walking out of his room.

Later on that day, Linus and Charlie Brown are at the rock wall talking about last night’s events. When Charlie Brown tries to console Linus saying “I’ve done a lot of stupid things in my life, too”, Linus blows a fuse and angrily vows to Charlie Brown that the Great Pumpkin will come next year, his ranting continuing as the end credits roll.

“It’s The Great Pumpkin, Charlie Brown” was the third Peanuts special (and first Halloween special) to be produced and animated by Bill Meléndez. Its initial broadcast took place on October 27th, 1966 on the CBS network, preempting My Three Sons; CBS re-aired the special annually through 2000, with ABC picking up the rights beginning in 2001. The program was nominated for an Emmy award. It has been issued on home video several times, including a Remastered Deluxe Edition of the special released by Warner Home Video on September 2, 2008.

Charles Schulz was born in Minneapolis, Minnesota, and grew up in Saint Paul. He was the only child of Carl Schulz, who was German, and Dena, who was Norwegian. His uncle nicknamed him “Sparky” after the horse Spark Plug in the Barney Google comic strip.

Schulz’s first regular cartoons, Li’l Folks, were published from 1947 to 1950 by the St. Paul Pioneer Press; he first used the name Charlie Brown for a character there, although he applied the name in four gags to three different boys and one buried in sand. The series also had a dog that looked much like Snoopy. In 1948, Schulz sold a cartoon to the Saturday Evening Post; the first of seventeen single-panel cartoons by Schulz that would be published there. In 1948, Schulz tried to have Li’l Folks syndicated through the Newspaper Enterprise Association. Schulz would have been an independent contractor for the syndicate, unheard of in the 1940s, but the deal fell through. Li’l Folks was dropped in January, 1950.

Later that year, Schulz approached the United Feature Syndicate with his best strips from Li’l Folks, and Peanuts made its first appearance on October 2, 1950. The strip became one of the most popular comic strips of all time. He also had a short-lived sports-oriented comic strip called It’s Only a Game (1957 – 1959), but abandoned it due to the demands of the successful Peanuts. From 1956 to 1965 he also contributed a single-panel strip (“Young Pillars”) featuring teenagers to Youth, a publication associated with the Church of God (Anderson).

Peanuts ran for nearly 50 years without interruption and appeared in more than 2,600 newspapers in 75 countries. In November 1999 Schulz suffered a stroke, and later it was discovered that he had colon cancer that had metastasized. Because of the chemotherapy and the fact he could not read or see clearly, he announced his retirement on December 14, 1999.

Schulz died in Santa Rosa of complications from colon cancer on February 12, 2000.