Them! is a 1954 Warner Bros. Pictures black and white science fiction film about a nest of
gigantic irradiated ants discovered in the New Mexico desert. The film is based on an original
story treatment by George Worthing Yates, which was developed into a screenplay by Ted
Sherdeman and Russell Hughes. It was produced by David Weisbart, directed by Gordon
Douglas, and stars James Whitmore, Edmund Gwenn, Joan Weldon and James Arness.

In the New Mexico desert, Police Sgt. Ben Peterson and his partner find a child wandering in the
desert and sooner they discover that giant ants are attacking the locals. FBI agent Robert
Graham teams up with Ben and with the support of Dr. Harold Medford and his daughter Dr.
Patricia ‘Pat’ Medford, they destroy the colony of ants in the middle of the desert. Dr. Harold
Medford explains that the atomic testing in 1945 developed the dangerous mutant ants. But they
also discover that two queen ants have flown away to Los Angeles and they are starting a huge
colony in the underground of the city. When a mother reports that her two children are missing, the
team and the army have a lead to follow. Will they arrive in time to save the children and destroy
the colony?

When Them! began production in the fall of 1953, it was originally conceived to be in 3-D and
Warner Color. During pre-production, tests were to be shot in color and 3-D. A few color tests
were shot of the large-scale ant models, but when it was time to shoot the 3-D test, Warner Bros’
“All Media” 3-D camera rig malfunctioned and no footage could be filmed.

Way back in 1954 monster movies were going through a renaissance. Over at Universal, they were preparing to unleash the “Creature From The Black Lagoon”, the last of their great line of classic monsters, on the world, while over in Japan, Toho was finishing up on their own monster film, “Gojira” (Godzilla), which would launch a 50 year movie series.
Meanwhile, at Warner Bros, director Gordon Douglas and producer David Weisbart were working on their own monster film, “Them!”, a movie about colonies of giant ants that were unleashed upon the world due to atomic testing in the New Mexico desert.Unbenounced to Dougles and Weibart, the film that they were about to release would change the landscape of American monster movies for the next two decades. For you see, after the success of “Them!”, film makers on this side of the Pacific would decide to leave the giant dinosaur movies to the Japanese, and instead, focus their attention on what would happen if the bugs decided to step on us humans for a change.

In the early developmental stages of the film, Warner Bros had big plans for “Them!”, intending to shoot it in color, and in 3D, to compete with Universal’s 3D “Creature” film.

Early 3D tests shots of the mechanical giant ants created for the film proved very promising, but when yet more tests were ordered by the Warner execs, the companies “All Media” 3-D camera rig broke down, causing both 3D and color to be scratched from the film entirely.Opting to use three ‘life-sized’ mechanical ants, instead of either stop-motion animation, or men in suites, was a big risk for the production. To date, no other film had attempted something that ambitious. Though, costly, in the end the use of the remote controlled giant ants worked quite well, especially in scenes where they had to interact with their human costars.

Trying to inter cut stop-motion animated ants just wouldn’t have worked out as cleanly, and as we have learned from such films as “Empire of the Ants”, using real ants, blown up to gigantic size and inserted into scenes, was out of the question.

As a matter of luck, “Them!” would be blessed with a stellar cast, including, James Arness, who would spend the next two decades playing Marshal Matt Dillon on the hit television series, “Gunsmoke”, along with James Whitmore, Edmund Gwenn and Joan Weldon.

The film would also serve as vehicle to boost the careers of television actors, Fess Parker, who would go on to star in Disney’s “Davy Crockett”, though the studio originally wanted Arnes for the part, and Leonard Nimoy, who as everyone knows, would go on to play Spock on “Star Trek”.

Actor, Booth Colman also had a small part in the film, and he would go on to play Dr. Zaius on the short-lived “Planet of the Apes” television series.

The film begins with New Mexico State Police Sergeant Ben Peterson (James Whitmore) discovers a little girl wandering the desert near Alamogordo, New Mexico, mute and in a state of shock. More mysterious deaths and disappearances occur in the area. When a store owner named Gramps Johnson is found dead, his store literally torn apart, his empty rifle bent and twisted beside the body, the cops theorize that there is a maniac killer on the loose. But, as Peterson’s boss points out (after Peterson’s patrol partner Ed Blackburn, played by Chris Drake, disappears without a trace), Gramps’ 30-30 was emptied and “Ed Blackburn was a crack shot. He could hit anything he could see. So unless your killer is armored like a battleship, there’s no maniac in this case.” It’s up to the coroner to deliver the verdict that “Gramps Johnson could have died in any one of five ways: his neck and back were broken, his skull was fractured, his chest was crushed, and here’s one for Sherlock Holmes. There was enough formic acid in his body to kill twenty men.”

The FBI sends in Ellinson’s fellow agent Robert Graham (James Arness) to assist. A single strange track is found in the desert. When the FBI is unable to identify the track, they attract the attention of Doctors Harold (Edmund Gwenn) and Pat Medford (Joan Weldon), a father/daughter team of entomologists from the Department of Agriculture.

The elder Doctor Medford arrives on the scene with a theory, but will not disclose it until he tries an experiment on the Ellinson girl, having her smell the contents of a vial of formic acid, which frees her from her state of near-catatonic withdrawal, screaming “Them! Them!” Returning to the destroyed trailer with Peterson, Graham, and his daughter, Medford has his theory dramatically given its final proof when the group encounters a patrol of foraging ants, mutated by atomic radiation to the size of automobiles. The lawmen kill one of the ants with a Thompson sub machine gun after finding that their revolvers have little effect. They aimed for the antennae on Medford’s advice that they were helpless without them.

A company of the US Air Force is brought in, led by General O’Brien (Stevens), which locates the ants’ nest and exterminates the inhabitants with poison gas. The younger Dr. Medford, who accompanies Peterson and Graham into the nest, finds evidence that two young queens have hatched and flown away to establish new colonies. Trying to avoid a general panic, the government covertly monitors and investigates any reports of unusual activities as sightings of “flying saucers”. One of the queens ends up in the hold of an ocean-going freighter loaded with sugar, which is then overrun by the ants and subsequently sunk by a US Navy cruiser. From the rantings of an alcoholic, and an investigation into the death of a father protecting his two young, now missing, sons from an apparent ant attack, the other queen is finally tracked to the Los Angeles storm sewer system, forcing the Army to openly declare martial law and launch a major assault.

During the assault, Peterson finds the two missing boys, named Mike and Jerry, alive, trapped by the ants in a sewer tunnel, which is also the entrance to the nest. Peterson calls in for backup, but instead of waiting for it, he bravely goes in alone, heroically rescuing the two boys and killing numerous ants with his flamethrower. Peterson leads the two boys back to the pipe through which he came, intending for he and they to crawl back through it to safety. After hoisting up the first boy, Jerry, however, another ant appears from behind, and thinking quickly and selflessly, Peterson saves the second boy, Mike, but after lifting the boy into the pipe, Peterson is left without time to save himself. As he tries to climb up into the pipe at the last minute, the ant grabs Peterson in its mandibles and crushes him at the waist, the man crying out in agony all the while.

Graham arrives to the scene quickly with the reinforcements, and kills the ant attacking Peterson, but rushes over to Peterson’s side with only enough time to hear Peterson’s last words confirming that the boys made it to safety, before Peterson dies in his arms. Graham respectfully orders Peterson’s body to remain undisturbed, and then returns to the battle, nearly getting killed himself when a cave-in temporarily seals him off from the rest of the men as they march towards the egg chamber; several ants charge him, but Graham is able to hold them off long enough for the other troops to tunnel through the debris and come to his rescue. The nest’s queen and egg chamber are then destroyed with flamethrowers after a short but fierce battle, but the senior Dr. Medford issues a grim warning that the atomic genie has been let out of the bottle, and further horrors may await mankind.

The film would end up being a huge success for Warner Bros, in fact it was their top grossing film for 1954.

The special effects teams decision to go with ‘life-sized’ giant mechanical ants for “Them!” would net them an Oscar nomination, but ultimately not the trophy.

Ultimately the success of the film would spawn two decades of imitators, including, Universal’s “Tarantula” and “Deadly Mantis”, American International’s “Empire of the Ants”, Transcentury Pictures “The Giant Spider Invasion”, and even Warner’s “The Black Scorpion.”

Of all the ‘giant bug’ films produced throughout the 1950s, 60s and 70s, “Them!” truly stands out as the best ever produced. Many even regard the film as one of the best science fiction films of Hollywood’s golden age.

Indeed, “Them!” is a very well executed monster film. The script, written by Ted Sherdeman, Russell Hughes and George Worthing Yates, is simple and effective. The effects are surprisingly realistic, especially for a film made in the 1950s. The acting is very believable and heartfelt, something not normally seen in many of the decades sci fi outings.

What truly stands out to me, is just how well the film stands up some 50+ years after it was produced, a true testament to the film making talents of Gordon Douglas, David Weisbart and their crew.

If you choose to see one giant monster film in your life……..well watch “King Kong” or “Gojira”, but if those get ya interested in more, watch “Them!” next.

Yeh, I was going to say, watch “Them!” first, but I couldn’t honestly say that the film is better than “Kong” or “Godzilla”.

Trust me, though, “Them!” is excellent, and a ‘must see’ for all sci fi and monster movie fans.

Here are more photos from “Them!”: 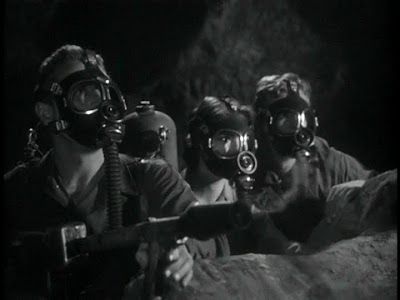 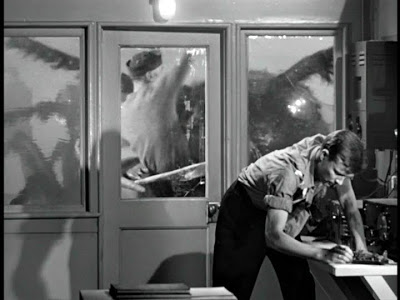