In 1932 a new horror movie was put into production to capitalize on the success of Frankenstein, and its star Boris Karloff. The initial idea was to produce a film based on the real life exploits of the French mystic Cagliostro, who claimed that he had lived for several generations. This idea was soon dropped for a screenplay that was penned by Nina Wilcox Putman that featured the resurrected corpse of an ancient Egyptian prince. One has to remember that Tutankhamen’s tomb had just recently been discovered and there was a national obsession with Egyptology. Universal felt that the combination of Karloff and this topical theme would guarantee a hit, and they were right.

Despite the fact that a film featuring the popular Karloff would be shoe-in to be a success, Universal didn’t want to take any chances. Karl Freund (Frankenstein, Dracula, I Love Lucy) was hired to direct a film whose script was almost a duplicate of the script for Dracula, a film that Freund was the cinematographer for. In fact The Mummy featured several scenes, dialogue and even some of the same actors that were in the Bela Lugosi classic. It would also figure that fellow Dracula alumni Edward Van Sloan and David Manners also had their hands in the production. Yet, despite the fact that the film itself may be a clone, it struck a chord with audiences and is considered to be one of Universal’s classics in its own right.

Cast alongside Karloff as the female lead was the uniquely beautiful Broadway actress Zita Johann. Johann however was not the studios first choice to play Princess Anck-es-en-Amon and her modern reincarnated counterpart Helen Grosvenor. Originally Katherine Hepburn was offered the role, but prior obligations kept her out of the picture. This may have come to director Karl Freund’s dismay. Johann would argue with her director over how scenes were to be shot constantly during filming. Freund in turn would do everything he could to make the actress uncomfortable. It has often been noted that he made her stand on the set for days so that her dress wouldn’t get creased. On the last day of shooting Johann was sent onto a stage with live lions while Freund stayed behind a protective barrier. Probably adding more insult to injury was the fact that the scene, along with several others that showed Helen Grosvenor’s past lives, was cut from the film. It is probably for these reasons that Johann often referred to the director as “the monster.” It should also be noted that the hypnotic actress had more than a passing fancy for the occult, which seemed to come through in her performance. In this way she was the perfect counter balance to the macabre Karloff.

In 1921 a British expedition unearthed the mummified remains of the High Priest Imhotep, which had been buried alive some 3,700 years prior for trying to resurrect the body of his departed love, the Princess Anck-es-en-Amon. A researcher named Ralph Norton discovers the Scroll of Thoth in the Mummy’s effects and while trying to translate the inscription accidentally utters an ancient spell that brings Imhotep back to life. Upon seeing the animated corpse Norton is driven mad and begins laughing hysterically. While the researcher trembles in fear the Mummy reclaims the scroll and shuffles out into the desert.

The Mummy would return ten years later in the form of an Egyptian priest named Ardath Bay (an anagram for Death by Ra). Bay instructs another research team where the remains of his love could be discovered and then disappears again. Once the remains had been exhumed and put on display in the Cairo Museum, Bay would again appear ready to bring back the soul of Anck-es-en-Amon. It soon becomes apparent however that the princess’s soul has moved on and is now inside the young socialite Helen Grosvenor. Bay’s only chance to be reunited with her now is to mummify her and bring her back with the same spell that resurrected him. In the films climax the archaeologists discover Bay’s true identity and his evil intentions just in time to burn the sacred scroll turning the Mummy to dust. 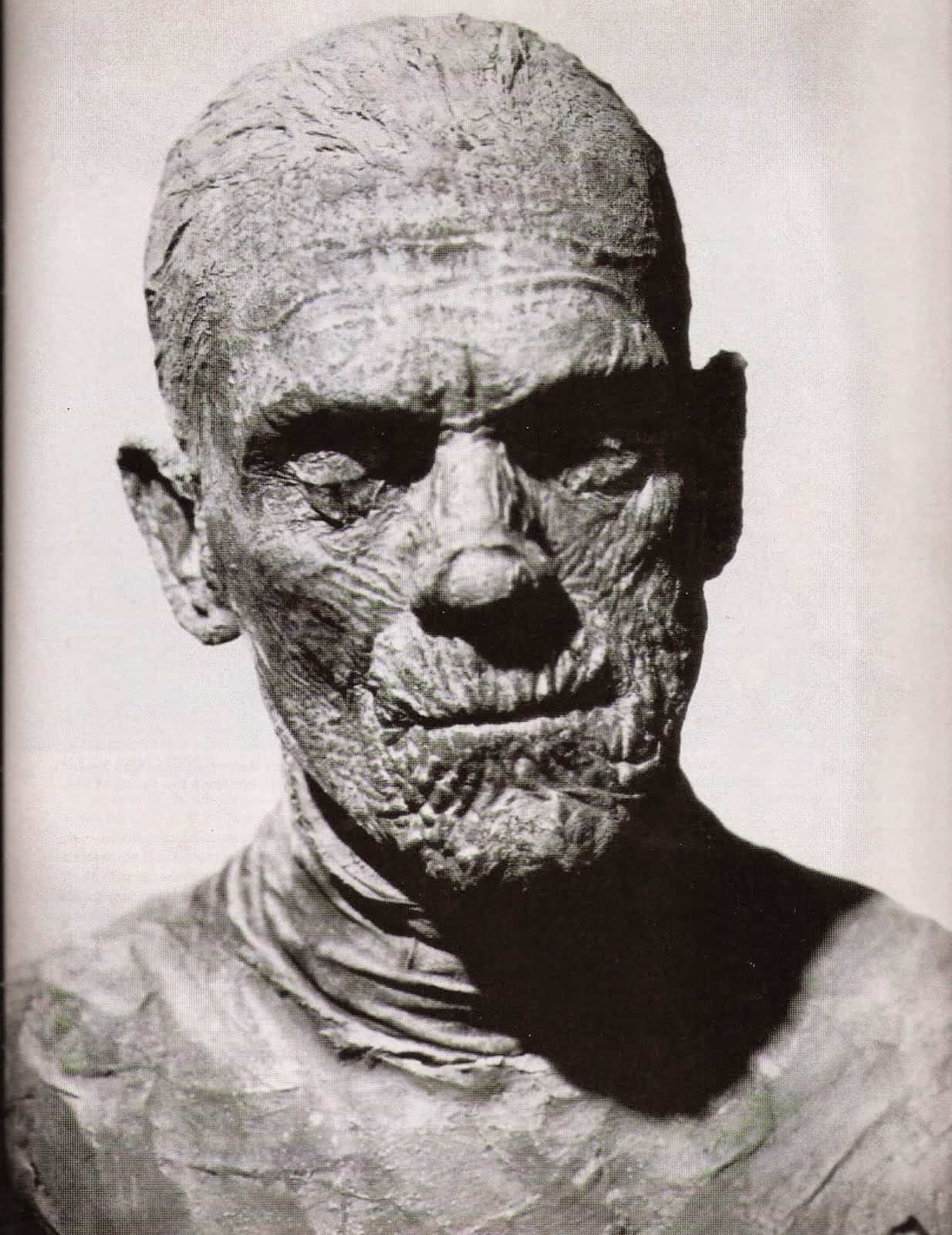 The Mummy will always remain a true monster classic. Once again Karloff delivers a stellar performance behind the incredible makeup of Jack Pierce. Look closely at the face of Ardath Bay, his skin looks amazingly like a mixture of flesh and bandages. Zita Johann is hypnotic as Helen Grosvenor (Amon) and the rest of the cast turn in memorable performances. Though most of the script may be “borrowed” it isn’t a distraction from making the film enjoyable. Just more proof that it is always better to go with a tried and true formula if it works properly with the theme. At least that is what Hollywood has been trying to convince moviegoers of for decades. Yet maybe this isn’t the place for me to get too preachy. Even though the Mummy may not be “original” it is a classic that is not to be missed.

1. Boris Karloff had created such a fan following from his role as Frankenstein that Universal billed him simply as “Karloff The Uncanny”

2. Boris Karloff sat through eight hours of makeup application each day before filming. The makeup took longer to apply, and was more painful to remove, then Frankenstein’s.

3. Several scenes featuring the re-incarnated soul of Anckesen-Amon as it traveled from generation to generation were filmed, but never made it into the finished film either by director’s choice or were banned by the Hays Office.

Frank Whemple: Oh, I know it seems absurd when we’ve known each other such a short time. But I’m serious.

Helen Grosvenor: Don’t you think I’ve had enough excitement for one evening, without the additional thrill of a strange man making love to me?

Frank Whemple: Yes. The fourteen steps down and the unbroken seals were thrilling. But when we came to handle all her clothes and her jewels and her toilet things – you know they buried everything with them that they used in life? – well, when we came to unwrap the girl herself –

Helen Grosvenor: How could you do that?

Frank Whemple: Had to! Science, you know. Well after we’d worked among her things, I felt as if I’d known her. But when we got the wrappings off, and I saw her face… you’ll think me silly, but I sort of fell in love with her.

Helen Grosvenor: Do you have to open graves to find girls to fall in love with?

Doctor Muller: Look – the sacred spells which protect the soul in its journey to the underworld have been chipped off the coffin. So Imhotep was sentenced to death not only in this world, but in the next.

Assistant: Maybe he got too gay with the vestal virgins in the temple.

Sir Joseph Whemple: “Death eternal punishment for anyone who opens this casket. In the name of Amon-Ra the king of the gods.” Good heavens, what a terrible curse!