Lon Chaney Jr. is the only person to have
played all four of the classic movie monsters:
The Wolf Man (1941) (Larry Talbot/Wolf
Man); The Ghost of Frankenstein (1942) (The
Frankenstein Monster); The Mummy’s Tomb
(1942) (Kharis, the mummy); Son of Dracula
(1943) (Count Anthony Alucard, Dracula’s son).

He only officially played the role of the
Frankenstein Monster twice: once in The Ghost
of Frankenstein (1942) and then again in a 1952
episode of the TV series “Tales of Tomorrow”
(1951). It wasn’t until 1957 when the 1932
version of Frankenstein (1931) staring Boris
Karloff would debut on TV. Also in 1957
Christopher Lee would assume the role of the
monster in The Curse of Frankenstein (1957).
Chaney played the role “unofficially” twice for
Bud Abbott and Lou Costello, in Bud Abbott
Lou Costello Meet Frankenstein (1948) in
which he stood in for Glenn Strange for one
scene while Strange recovered from a broken
ankle, and for a 1951 “The Colgate Comedy
Hour” (1950) episode where, in a mock-opera
sketch, Chaney appears (for some reason) in
full monster regalia and dances a Charleston

In 1941 Curt Siodmak sat down at his desk with the intention of writing a horror story that would draw on Greek Mythology and the belief that somehow a man could transform into an animal, a common legend that ran through the folklore of just about every culture on Earth. Little could he have realized that the script he was about to write, The Wolf Man, would not only have an effect of the future of horror films, but the future of the occult as well. It has always been a common belief that many of the concepts of lycanthropy that were portrayed in the film came from a collection of popular folklore and witchcraft. In fact nothing is further from the truth. Siodmak was responsible for coming up with the design of the pentagram, the werewolf’s vulnerability to silver, and the full moon being the catalyst for the transformation from man to beast all on his own. In fact the legendary poem “Even a man who is pure of heart, and says his prayers by night, may become a wolf when the wolf bane blooms, and the autumn moon is bright.” is a Siodmak original.

The Wolf Man was not the first werewolf film to be produced by Universal, that distinction belongs to “Werewolf of London” which flopped at the box office in 1935. The film starred popular character actor Henry Hull in a far more subtle makeup job by Jack Pierce, the same man who transformed Lon Chaney Jr. Into the Wolf Man six years later. Many fans that have seen this earlier effort have commented that the werewolf looked far more menacing than the version that came after. 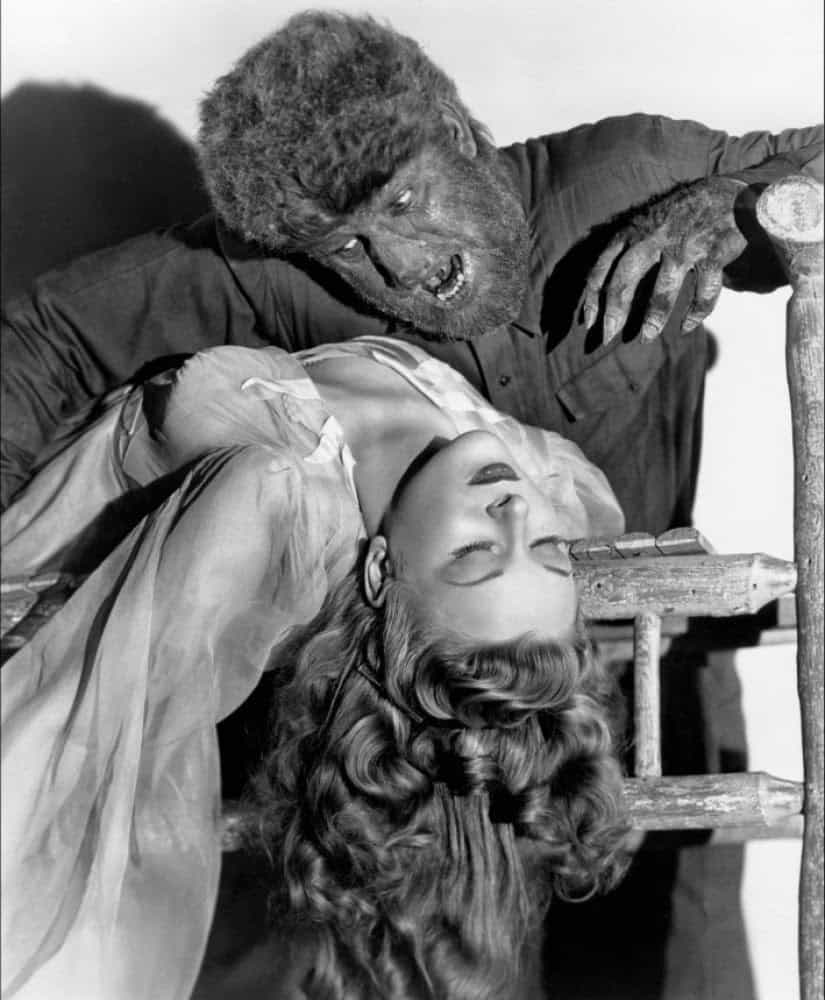 Universal convinced the reluctant Lon Chaney Jr. to follow in his father’s footsteps and endure the six-hour makeup sessions to portray Larry Talbot and his harry alter ego the Wolf Man. The character transformed Cheney into a superstar. The Wolf Man would prove to be so popular that it would appear in a total of five films (Frankenstein Meets the Wolf Man, House of Frankenstein, House of Dracula and Abbott and Costello Meet Frankenstein) all of which were played by Cheney. It has often been noted that all the popularity and fame that Cheney achieved never brought him true happiness. In real life the actor had his own internal demons to deal with. Alcoholism would be a life long fight that would eventually take a toll on him. When Cheney passed away he was so riddled with disease that he donated his body to the USC Medical Center for study, leading to the urban legend that somewhere in the bowls of the hospital the actors head is preserved in a jar.

When Larry Talbert returns to Llanwelly, Wales to rekindle a relationship with his estranged father, Sir John Talbert (Claude Rains) he gets far more than he bargained for. While examining his fathers telescope he accidentally focuses in on the bedroom of the fetching Gwen Conliffe (Evelyn Ankers). The young Talbert is so impressed with the young woman that he shows up at the family store the next morning to meet her. While there he stumbles upon an interesting walking stick that bears the silver head of a wolf marked with a mystic pentagram. Talbert feels inclined to purchase the item to convince Conliffe that his intentions are admirable and that he would be trustworthy enough to go out with. Not completely trusting him she agrees to the date, but only if she can bring one her friends along.

While the trio is out at a local carnival Gwen’s friend Jenny is attacked by what appears to be a wild animal. Talbot uses his new cane to fend of the creature, but gets bitten in the process. When the police arrive to investigate the attack they discover the dead body of a traveling gypsy. Talbot is questioned but cannot explain how he could have mistaken the young man for a wolf.

Strange things begin to happen to Talbot. He starts experiencing missing time and begins to feel as if he is loosing control of his sanity. To make things worse there are more murders and the local authorities begin to doubt his stories and his innocence.

The gypsy woman, Maleva, soon reveals to Talbot that the animal he killed was not a wolf at all but a werewolf. Her son Bela (Bela Lugosi) had lived with the curse for years and now the lycanthropy had been passed to him. 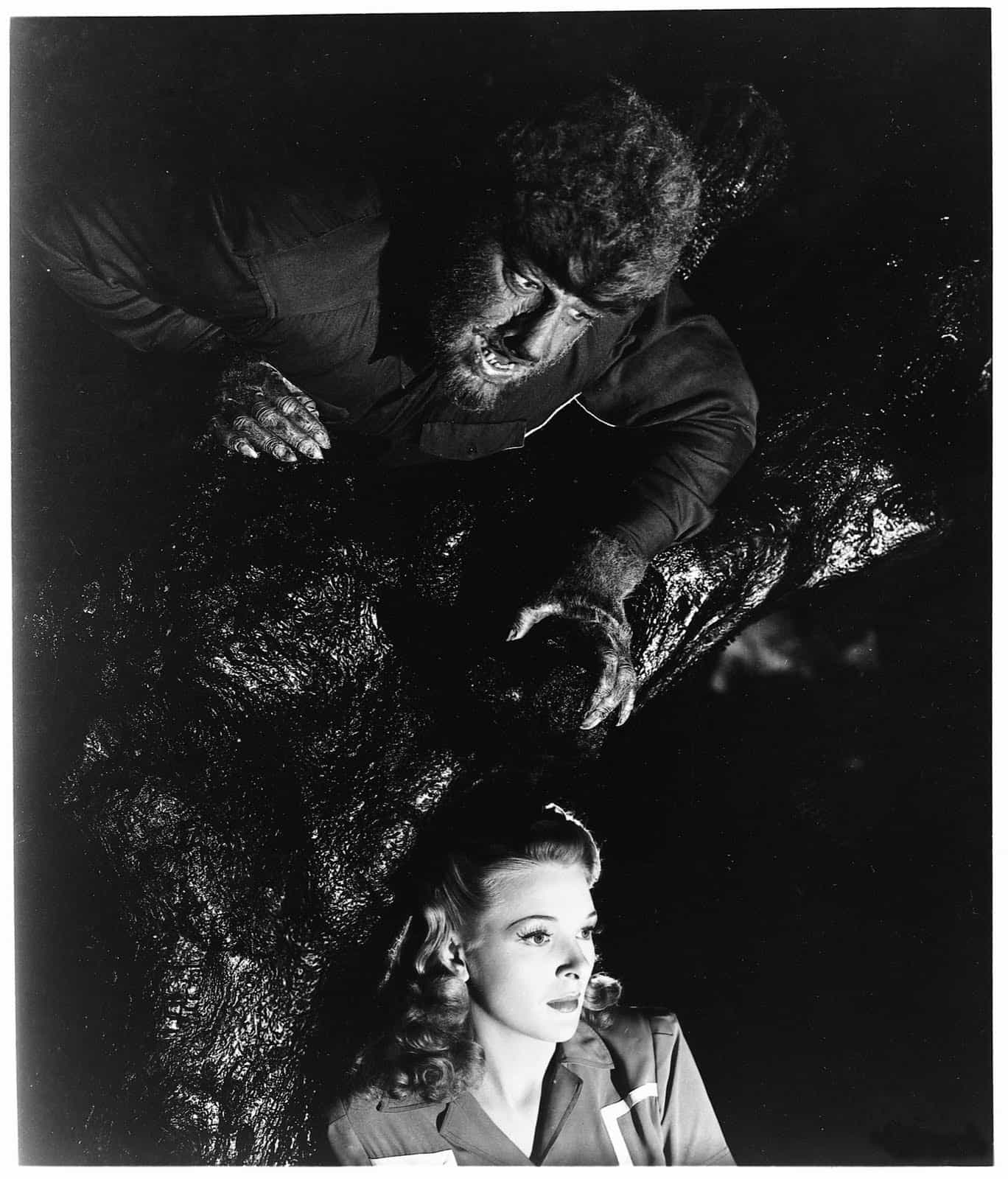 Uncontrollably the stricken Talbot begins running wild at night and the local populous begins to organize hunting parties to capture or kill him. One night Gwen comes looking for him and he attacks her. John Talbert arrives just in time to stop the attack and unknowingly kills his own son with the silver handled walking stick. Moments after his death he reverts back to his human form revealing that the monster had indeed been Larry Talbot the entire time.

The Wolf Man not only was inspired by already existing mythos, it successfully changed it forever. Every werewolf picture that was produced after it followed the new folklore that was created for the film. It was almost like all prior legends of the creature had been erased from public knowledge. One can only give credit to a well conceived screenplay and a well executed film that made a strong enough impression on audiences that it actually rewrote history….in a sense.