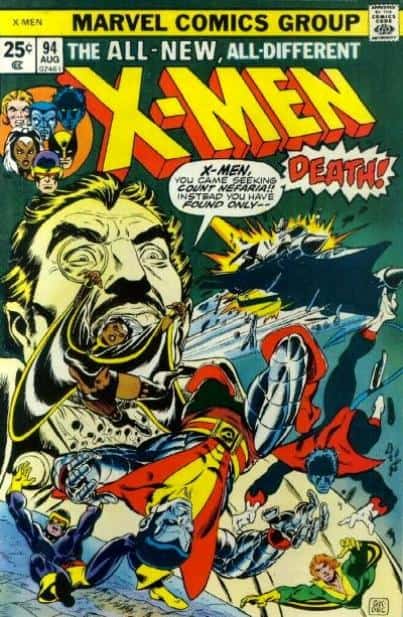 In the Rocky Mountains of Colorado a helicopter flies
near Valhalla Mountain. Buried beneath the mountain is
the command center for NORAD. In the War Room, a
package is brought to Joe Harris. He opens it and finds
that it is a box that has written, “Press Me,” on it. Joe
laughs and presses the button.

Professor X gathers the large team together in the school. He wants to
congratulate them on their last battle as well as talk to them about the
future. No sooner does he get the words out of his mouth when Sunfire
speaks up and says he is leaving the team. Xavier tries to stop him,
but Sunfire refuses. The other new members of the team stay, some
hesitantly and Sunfire flies away. Banshee is asked and begins to say
that he is too old for the team of young heroes, but accepts the
challenge anyhow.

Unexpectedly, some of the original group as well as Lorna Dane and
Havok decide to leave. They reason that when they joined the team,
they were young and inexperienced. They have decided to live their
lives on their own since Xavier has taught them to be responsible. Out
of the original group, Cyclops is the only one to remain.

The next day, Cyclops says his goodbyes and tells Jean he loves her
and that he is staying. She tells him she loves him and then leaves with
the rest of the group. Cyclops brings the new team to the Danger
Room for their first trial run. Thunderbird proudly decides to go first
and a few seconds later is flung out the entrance. The next few days of
Danger Room training runs the X-Men group hard. During one of the
sequences, Thunderbird is grazed by a laser beam on his leg.
Cyclops calls him out as being careless and tells him how he could
have lost his leg if the laser was on full power. Thunderbird fights back
until Xavier telepathically demands their disgraceful display to cease.
He tells Thunderbird to get to the infirmary and Cyclops to report to his
office.

Comic Book will be shipped bagged and boarded!