When the Japanese movie giant, Toho Studios, put their
number one international film star, Godzilla, on a ten year hiatus
following the movie, “Godzilla: Final Wars” in 2004, it was
assumed, by many, that the nation’s long-lasting love affair with
giant monsters was over.They were wrong.After all, it was Toho’s assertion that the giant monster genre
had run it’s course in Japan, and that the constant decline in
box office dollars for their prized Godzilla movies was a direct
indication that fans no longer found the constant destruction at
the hands of over-sized creatures entertaining. So they put
Godzilla on a ten-year vacation to rethink the genre and how to
approach it, hopefully to come out afterword with fresh ideas
to recapture the hearts of monster movie fans again and return
their product to the top of the heap.What they didn’t realise was that with Godzilla out of the way,
other Japanese film makers would seize the moment to
produce their own giant monster films, and bring about a new
renaissance of the films that Toho thought nobody wanted to
see anymore.

Since 2004, the boom in monster movies began rather slowly, but gained momentum over the past couple of years, and not only in
Japan, but worldwide. Indeed independent film makers world-wide, who grew up watching Toho’s Godzilla, and other monster
movies, became inspired to create their own city smashing titans.The greatest number of these have been produced right here in the United States, but film makers in Europe and numerous other Asian
countries, have gone into the giant monster movie business as well. The most notable of these is South Korea, who have produced a
number of very good films over the past five years, including Bong Joon-Ho’s acclaimed monster movie “The Host”. In the eyes of
many fans, Korea seems ready to take the giant monster movie crown away from Japan.America’s latest entries into the giant monster genre, Guillermo del Toro’s “Pacific Rim” and Gareth Edwards’ upcoming remake of
“Godzilla”, are mega-blockbusters that utilize the latest advancements in computer generated special effects.So far, due to the renewed interest in monster films in ‘the land of the rising sun’, Japanese film makers have been able to hold off the
pressure from Korea, and remain the genre’s top dog.. 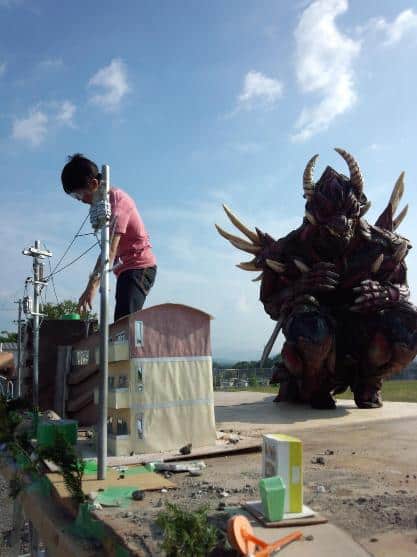 As everyone knows the Japanese have always been on the
cutting edge when it comes to computer technology, yet when
it comes to fantasy films there is still a major contingency that
likes to do things in a more traditional manner. Indeed the art
of “Suitmation” (filming an actor in a monster costume against
miniature sets) which was made popular by special effects
master Eiji Tsuburaya in a vast series of sci fi films and
television series including “Godzilla”, “Rodan”, “Mothra” and
the long running “Ultraman” dates all the way back to the
Shochiku Company’s 1933 production “Wasei Kingu Kongu”
(obviously inspired by RKO’s “King Kong).Today a whole new generation of Japanese film makers are
preparing to step into the shoes of the effects pioneers that
have proceeded them. To this new breed tradition is much
more important than technology and on a warm sunny
afternoon in Osaka these future film effects artists are filming
men in monster suits on a set littered with miniature buildings,
cars and power lines instead of toiling away behind a
computer. Just like it was done back in the 50s, 60s, and 70s
before digital effects took over movies.Director Shingo Maehata and Hiromasa Mitsudome (Former
special effects supervisor on “Ultraman”) and their students at
Osaka University of Arts have recently produced their own
unique take on the daikaiju (giant monster) genre entitled
“Zella: Monster Martial Law”, a short 41 minute film featuring
giant cyborgs, monsters and plenty of building being smashed
into pebbles.
At this present time Maehata and his students don’t have any major plans for “Zella” though a subtitled version will be released online
soon and a possible film festival tour could happen sometime in the future.Though this college project is ambitious it is not the only monster movie to be produced over the past decade in Japan.  Here are some
more, post Godzilla, films that you may or may not be familiar with: 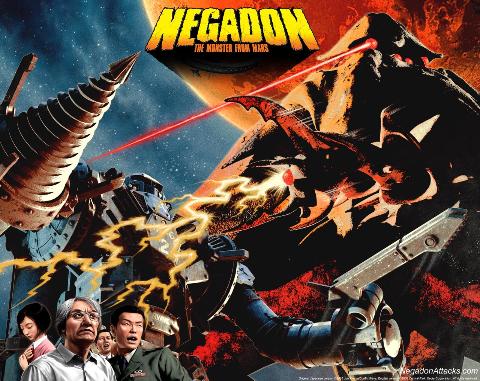 Negadon The Monster From Mars
(2005)Directed by Jun Awazu from his original script and
rendered in staggeringly realistic computer graphics,
Negadon: The Monster From Mars pays homage to
a wide variety of 1950’s and 60’s Japanese monster
movies such as Godzilla, Mothra, and other classics
which first brought global attention to Japan’s
then-emerging post-war feature film
industry.Negadon is the world’s first completely
computer-generated monster movie. The film was in
production for over three years and required the
invention of special rendering algorithms to reproduce
a 1950’s style look. Unleashed in Japan in October
2005, Negadon won the Outstanding Production
Award at the 20th Digital Contents Grand Prix and
was named a Jury Recommended Work at the 9th
Japan Media Arts Festival.

In the year 2025, the world population explodes to over 10 billion. In search for a new place to live, mankind initiates the space
exploration project entitled “The Mars Terraforming Project.” Step by step, mankind successfully transforms Mars into a habitable
planet.But when a Japanese freight spaceship returning from Mars crashes on the streets of Tokyo unleashing a giant and vicious
monster from underneath the surface of Mars, only Dr. Narasaki and his long-abandoned robot Miroku can save Earth and mankind. 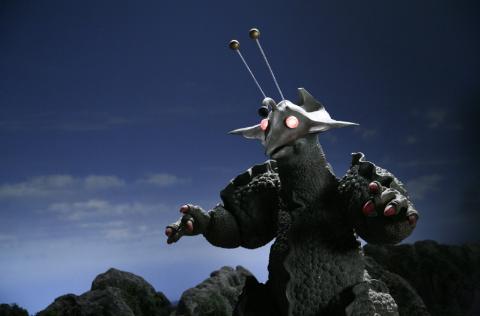 Monster X Strikes Back: Attack the
G8 Summit! (2008)This time around director Minoru Kawasaki decided
to not only lampoon Japan’s giant monster films, but
Japan’s government in his remake of the 1967 film ,
“Uchuu Daikaijuu Girara” (The X From Outer
Space).In the summer of 2008, the G8 summit is being held
at Lake Toya, a beautiful resort near the volcano in
Hokkaido. At the same time, the Chinese rocket falls
into Japan, causing the monster to be born from the
spore attached to the rocket. The monster, Guilala,
moves toward the summit conference site for the
pursuit of volcanic energy.
Now the world leaders have to terminate Guilala to show their country’s prestige. First mission is missile attack by Japan, then Italy,
Germany and… Deadly combat between human beings and the monster from outer space continues, but just when everyone starts to
give up, two journalists finds a strange group worshiping the traditional “idol” at the lakeside. 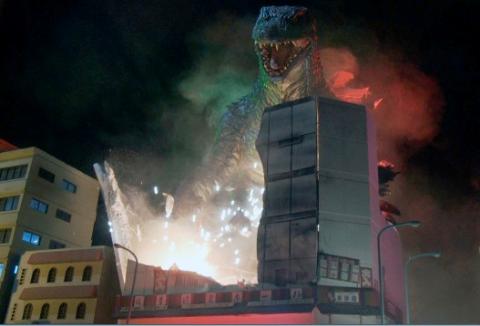 Shinpei Hayashiya didn’t waste any time in making a
sequel to “Deep Sea Monster Reigo”, which began
production in 2003, was filmed in 2005, and
released in August of 2008.

The film entitled, “Deep Sea Monster Raiga”, is set
60 years after the events in “Reigo”, which took
place during WWII.

This time, Global Warming is the catalyst for
unleashing giant monsters on Japan. The melting of
the southern polar ice causes a disruption in Earth’s
ecosystem that causes the migration of the
monsters, four in total, to the island nation.

Interestingly enough, in the weeks prior to the films release, director Shinpei Hayashiya seemed more interested in turning the three
young female actresses from his movie, Enosawa Manami, Urata Mao and Oriyama Miyu, into Japanese pop stars than promoting his
movie.The trailer for “Deep Sea Monster Raiga” was more music video, than promotional movie clip, and the singles “Round Punch of Love”
and “I Slip Tears” by the trio were heavily promoted by Hayashiya who paraded them onto every Japanese TV show he could.

Johnny has been working with McDunn at the old lighthouse for the past three months. The lighthouse is situated on a rock 2 miles out
to sea, and Johnny is looking forward to “shore leave” the following day. That night, McDunn tells him about a huge sea creature that
comes to the lighthouse every year to cry out at the fog horn [mistaking it for the cry of its own kind]… and tonight is that night! The
two make their way to the top of the tower and watch as the monster ascends and begins its yearly ritual. Very fascinating indeed, but
when McDunn turns off the fog horn the monster shows its true, primitive nature!

Originally “The Foghorn” was to get a theatrical, and possibly a DVD release, but legal issues stood in the way. 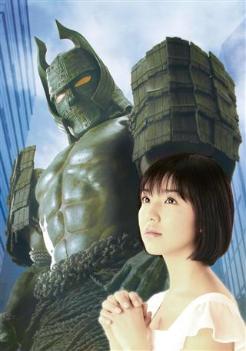 In the original 1966 film, “Daimajin”, and ancient statue is brought to life by the prayers of
an oppressed village. The Daimajin destroys the armies of the evil feudal boss that ruled the
village, then begins destroying the village itself. Only the tears of a young woman stops the
carnage and turns the statue to dust.

Producer Shigenori Takatera (Kamen Rider Hibiki) was put in charge of developing a
modern-day story based on the original films for adult audiences.

Rikuna Yuka, had this to say about here character, “In the dorama (a late-night TV drama
aimed at an adult audience) Kanon is able to experience personal growth despite the
cold-hearted and painful life in the city. Just like her I was able to learn a lot during the
filming and think that I grew up a bit myself.”

“This time the heroine will be a college student called Kanon who keeps on singing prayers
that awake the giant god of war. Once again Daimajin will have to deal with a lot of bad
guys.”