Zone Fighter, known in Japan as Ryūsei Ningen Zone, is a tokusatsu science fiction
superhero television series. Produced by Toho Company Ltd., the show aired on Nippon
Television from April 2 to September 24, 1973, with a total of 26 episodes, it was cancelled
due to the oil crisis of 1973. This was Toho’s answer to not only the popular Ultra Series, but
the Henshin Hero phenomenon started by shows like Kamen Rider and Android Kikaider.
The previous year, Toho had just made their successful first superhero show, Rainbowman.
The series was also notable for its guest appearance by Toho’s own Godzilla, as well as two
other Toho monsters, King Ghidorah and Gigan.

The last appearances of the original King Ghidorah and Gigan (who would return in updated
form 31 years later in Godzilla: Final Wars).

Takes place in the same continuity as the original Godzilla series, according to Toho Co.,
Ltd.

Most American Godzilla fans are familiar with all of the monsters 28 films, television commercials, comic books, action figures and etc. What may be a mystery, to great many of them, is the monsters numerous appearances in Japanese TV shows. Granted, in many of these, it isn’t actually “Godzilla”, but the monster’s suit reused to represent another monster, most notably as Gomess, in the second episode of “Ultra Q” and as Jirass in the “Ultraman” episode, “The Mysterious Dinosaur Base”.

In the case of Jirass, the monster is nothing more than a used “Godzilla” suit from “Mothra vs Godzilla” with a neck sail added. As you probably already know, Ultraman yanks the sail off, and then it was Godzilla from then on.

Despite all of these attempts to reuse the monster as other monsters, Toho would call on Big G to help boost the ratings of their 1973 television show, “Ryusei Ningen Zon” (Zone Fighter), which the studio had created as direct competition for the popular “Ultraman” and “Kamen Rider” series. 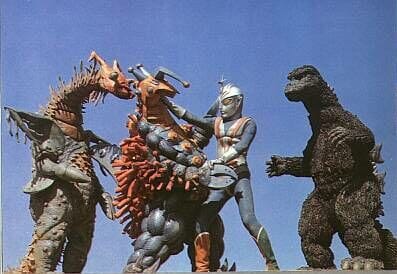 Godzilla was not alone as far a cameos on “Ryusei Ningen Zon” were concerned. Toho would also dust off both King Ghidorah and Gigan for numerous appearances as well. In one episode. Godzilla actually kills Gigan while Ghidorah flies away. To be honest Ghidorah is the only monster to survive a tangle with the Godzilla/Zone Fighter duo. All other the monsters featured on the show met their makers.

On the show Godzilla is such a close friend to Zone Fighter that he actually builds him a custom cave to live in close by so in an emergency he could call upon the monster for help. You know kinda like how Dr. Quinn Darien and Carl Majors could push that red button and Godzilla would pop out of the sea to fight off whatever Godzooky pissed off. Here is a quick synopsis:

The Zone Family is forced to find shelter on Earth after their home planet, Peaceland, is destroyed by the Garoga Army. Posing as the Sakimori Family, the Zone’s had hoped to begin a new life, instead they would become Earth’s defenders against the Garoga Army.

The Zone Fighters are able to transform to giant size to battle the giant beasts enslaved by the Garoga.

Godzilla is soon called upon to aid in the protection of Earth. Together Zone Fighter and Godzilla would prove to be more than a match for Garoga’s beasts. Garoga would call upon two of Godzilla’s nemesis, King Ghidora and Gigan, to aid in the destruction of Earth. Even these two monsters would prove to be no match for Earth’s new dynamic duo. Zone Fighter would send King Ghidora packing while Godzilla would kill Gigan. The series would last for 26 episodes before an energy crisis in Japan would force the cancellation of several television projects.

Though Toho considers the series as part of Godzilla’s official time-line, and the series managed to boast decent ratings, the studio has never opted to relaunch it.

To many outside of Japan the show is a mystery. Many don’t even know of it’s existence. With any luck, someday, the series may get a DVD release here in the states, but I wouldn’t hold my breath.